During the ongoing row concerning the FIA’s attempt to clamp down on aerodynamic bouncing and so-called ‘flexi-floors’ in Formula 1, Red Bull’s Christian Horner argued against proposals to tweak the rules in-season, saying “there’s no such thing as the intent of the regulations. It’s a binary thing.”
Funnily enough, Ross Brawn – now F1’s managing director of motorsports – became embroiled in a very similar argument back in 1996, when technical director of the Benetton team.

Coming off the back of a constructors’ championship in 1995, Brawn’s Benetton outfit was caught out by new regulations that mandated higher cockpit sides for 1996, as part of the drive to improve safety following Ayrton Senna’s fatal accident at Imola two years earlier.
Brawn was particularly unhappy with the approach taken by Jordan and Williams, which both used different ingenious methods to achieve lower cockpit sides than rivals and therefore gain greater aerodynamic efficiency. 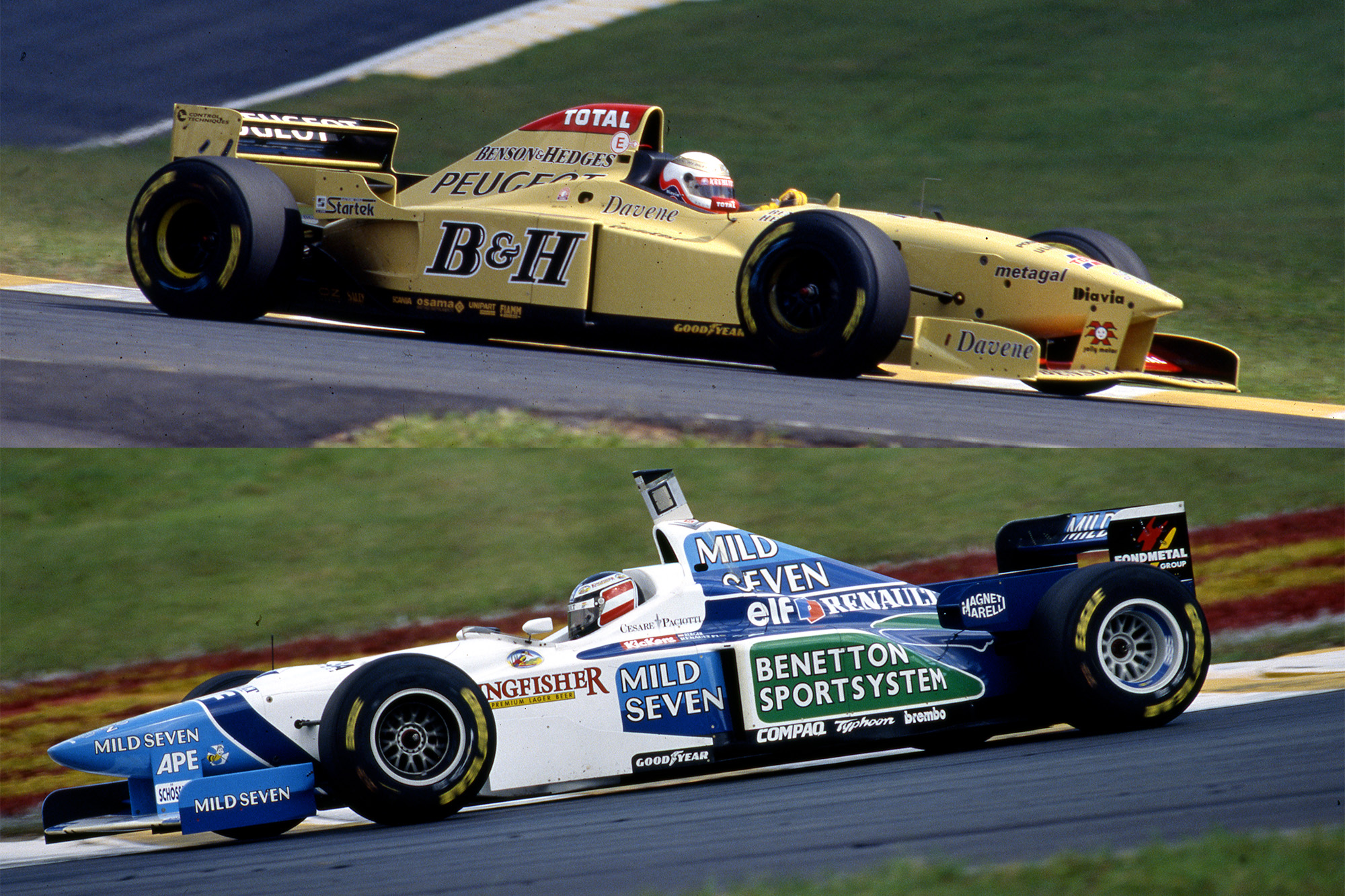 In a recent episode of The Race’s Bring Back V10s podcast, revisiting the 1996 Australian Grand Prix and Jacques Villeneuve’s incredible F1 debut, Jordan’s then technical director Gary Anderson reveals how his team achieved a design that so angered Brawn.
“What we did was reverse the roll hoop – in other words the front leg of the roll hoop normally comes up fairly vertically and the rear leg that goes to the back of the chassis is sort of angled,” Anderson explains. 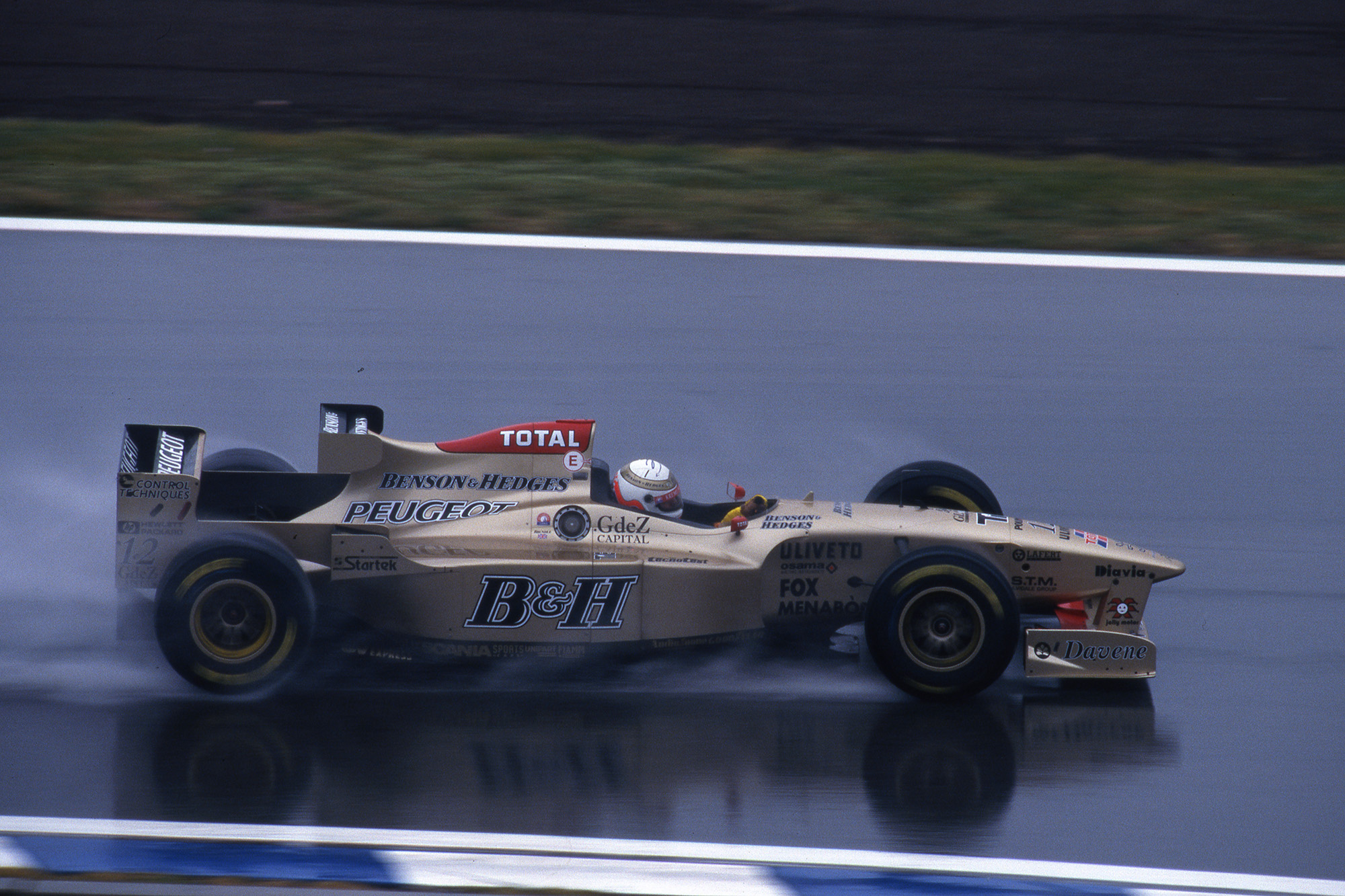 “Then to make the line between the rear roll hoop and the front roll hoop pass the driver’s helmet, we raised the spike on the front of the chassis – so it was 45mm higher – because again you’re allowed that 50mm deflection.
“Everything was still in place, so it was as-required by the regulations as far as the roll-over bars were concerned, as far as the line was concerned over the top of the driver’s helmet, but the front of the headrest was defined from that line, there was an offset to that line, so because we had a shallower [angle of] line, we had a shallower headrest area – which meant it didn’t look like a rubbish skip, which is what the Ferrari, for example, did look like.”
In a special guest appearance on The Race’s F1 Tech podcast last month, then Ferrari designer John Barnard admits his team designed something which was bulkier and much less efficient.

“It was the result of me leaving my aero guy alone to go and do the windtunnel testing,” Barnard explains. “Following the rules exactly as they were written, and producing this headrest thing alongside the driver, he did that on the model in the tunnel and he phoned me up and said ‘do you know what, this is making it better – this is giving us better numbers!’.
“I said ‘are you sure?’ and he said ‘yeah, we’ve tried it a couple of times and it’s improved the numbers’. I said, ‘it doesn’t look right; it looks wrong somehow’.
“What happened was, we went with that result but he hadn’t looked at the airflow into the airbox. It screwed up the airflow into the airbox, and if you ever look at some of the pictures of [Michael] Schumacher driving it, on the straight he’s got his head [leaning] over to improve the airbox flow. 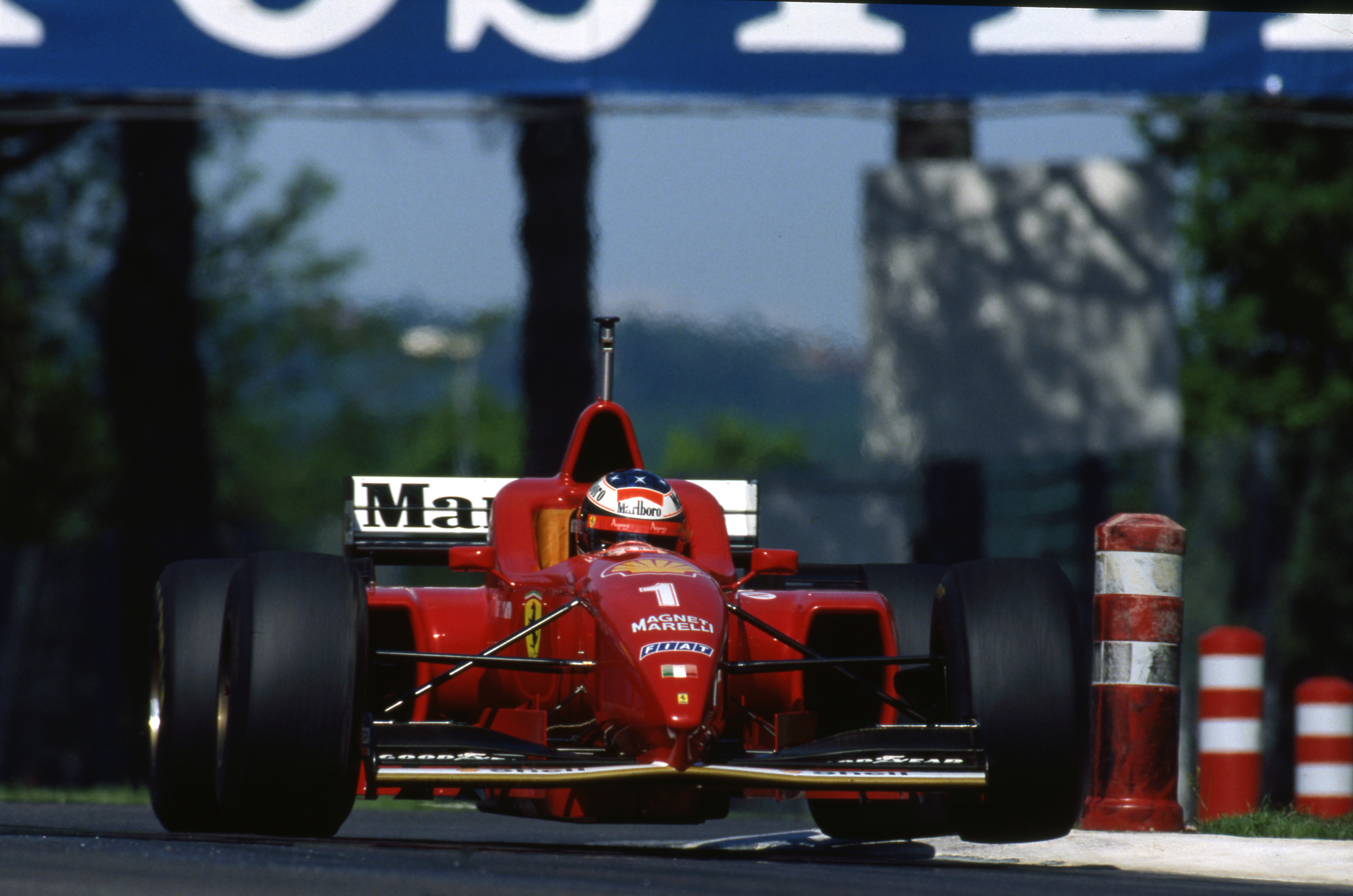 “To be fair, it had a fair bit of downforce that car – it won Spain in the wet; Schumacher was sailing away from everybody and I think that’s because it had really good downforce – what it didn’t have was good straightline speed, that was probably its biggest downfall.”
At the time, Brawn, whose team had designed something similar in appearance to Ferrari’s solution, publicly criticised Jordan’s interpretation, saying: “the top of the roll hoop is the top of the roll hoop, and you can’t use two different positions to measure it. As far as I can see in the Jordan, the helmets are well outside the cockpit so I’m sure there’s going to be some fuss over that.”
The Williams headrest was even lower than the Jordan’s. Adrian Newey, now of Red Bull of course, found a loophole that the height of the chassis beside the driver’s head was specified, but the rules did not explicitly say the height of the headrest had to be the same. 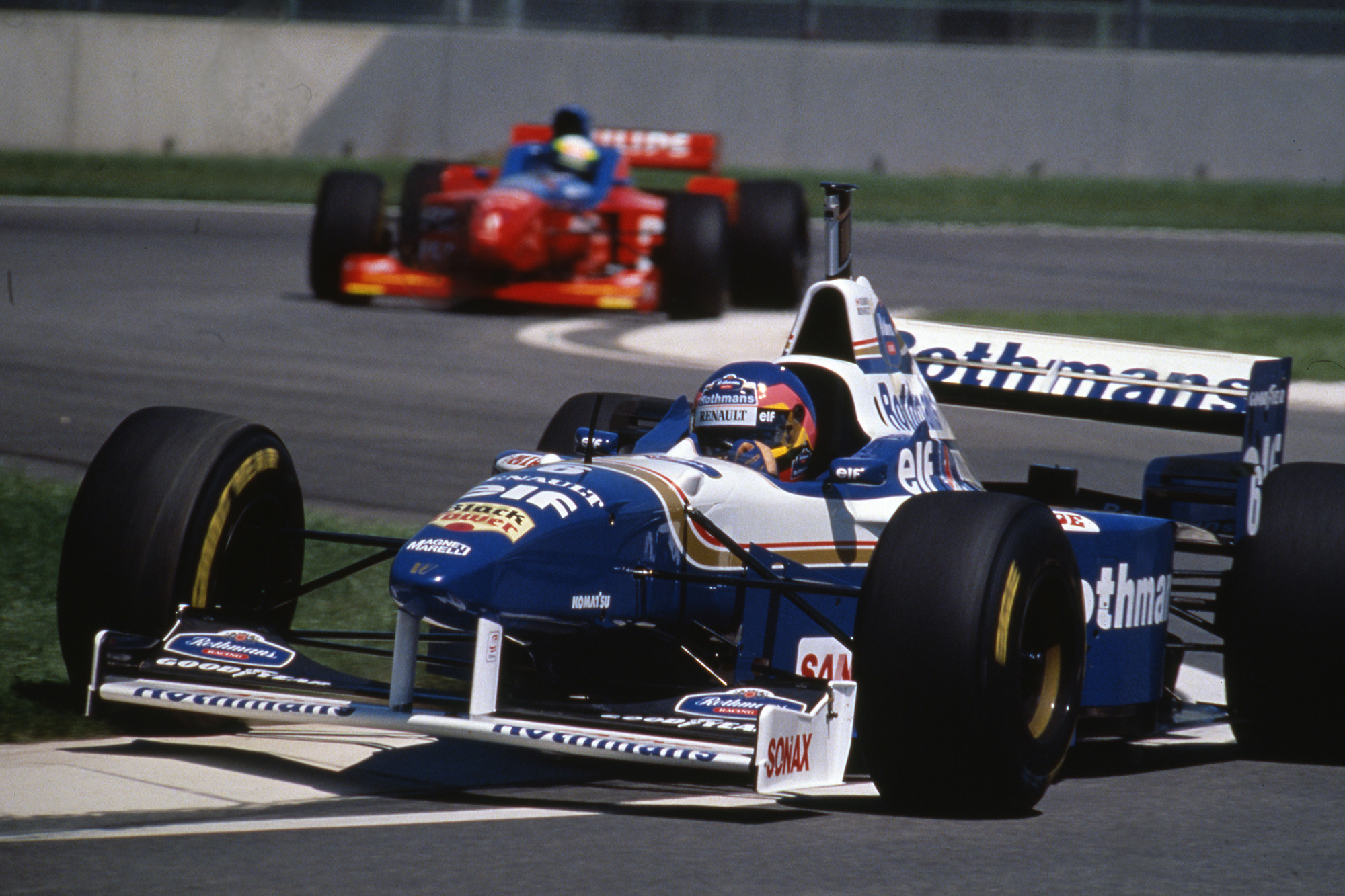 The headrest only had to have a minimum total area, so Newey took that area and placed it as low as possible above the driver’s shoulders, then he satisfied the chassis height regulation with a tiny fin on the top of the headrests.
Brawn initially said the Williams looked ‘sensible’, but by the time he got to Australia he was less happy – saying: “when the rules were made, the intention was clear and I’m not sure the intention has been met. They comply with the letter of the rules, it’s just a question of whether we need to re-write the rules. It’s up to the authorities to decide whether it complies with the spirit.”
But, as Newey said in his autobiography, “rules are rules and there’s no clause about intent of the regulation”. This is a point Anderson agrees with.
“It’s another way of looking at it, getting the headrest lower down than the top of the chassis,” he says. “At that point in time we never read that solution.
“We sat in the Technical Working Group with the FIA when these regulations were all being changed, and there was a technical representative from each team.
“I was the one from Jordan, and after Ayrton Senna’s accident we were coming up with stuff to try to protect the driver better – make it into a survival cell instead of a monocoque – and at each meeting some of these things were being opposed, so you were sitting there thinking about it as you were signing up to it, or debating it, so you always try to find the solutions and our first solution was turning the rollover bar the other way around.
“It’s the same old deal, there is no rule that says ‘this is the intent’. It’s all about the numbers – the numbers are black and white and that’s what you’ve got to abide by.”
That was the approach that won out in this particular row. Williams and Jordan raced in their Melbourne cockpit configurations all season, and by 1997 most teams had moved in similar directions.
Red Bull has left F1 rival Ferrari troubled and perplexed by its performance at Spa and the RB18’s speed on the straights and in the corners
Formula 1’s 2022 Belgian Grand Prix featured some of the most clear-cut winners and losers of any race this Formula 1 season
The Belgian GP stewards have warned Lewis Hamilton for an apparent initial refusal of a medical check after his clash with Fernando Alonso
F1 championship leader Max Verstappen made light work of winning the 2022 Belgian GP, despite having served a back-of-the-grid penalty
Lewis Hamilton was labelled an idiot by fellow Formula 1 champion Fernando Alonso after their Belgian Grand Prix collision – but the stewards elected not to penalise the Mercedes man due to mitigating factors
The Belgian Grand Prix has agreed a one-year extension to its contract and the Spa race will remain on the F1 calendar for 2023
The Race started in February 2020 as a digital-only motorsport channel. Our aim is to create the best motorsport coverage that appeals to die-hard fans as well as those who are new to the sport.

Posted on August 5, 2022
There have been some stupendous performances over the years and, in this episode of our “Short View Back to the Past” series, Chief Editor...
Read More

Posted on June 24, 2022
Having started from the front-row, Alonso was running seventh when he began to struggle with an engine issue and his speed was compromised on...
Read More

FIA: No backing down on F1 flexi floor/porpoising clampdown – Motorsport.com

Posted on August 3, 2022
In the wake of driver complains about the safety implications of excessive car bouncing, motor racing’s governing body introduced a raft of measures aimed...
Read More