The MotoGP British Grand Prix was a flat-out battle from lights to flag in 2022. Francesco Bagnaia came out on top, defending from a late charge from Maverick Vinales. 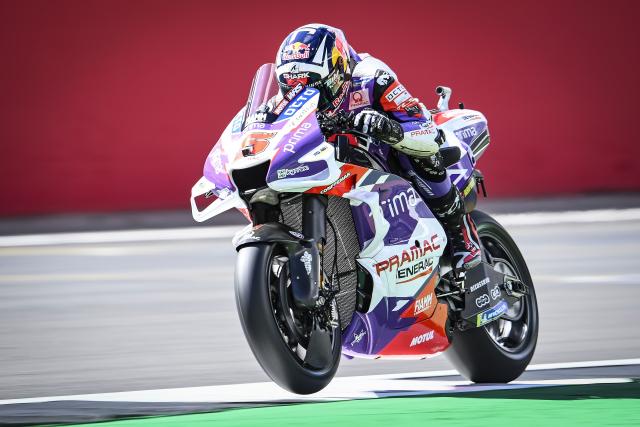 Zarco led the first lap, despite pressure from Quartararo, eager to make ground before his long lap. In fact, this was Quartararo’s strategy, highlighted by his choice of a soft front-medium rear tyre chocice. In comparison, most of his rivals chose the medium front with the hard rear.

cmgAdQueuePush( function(){ AccelerateAdManager.displayAd(“VD-mpu-2-mobile”); });
On lap three, Francesco Bagnaia started to lose ground. He was passed by Alex Rins into The Loop,  and became immediately under pressure from Maverick Vinales.
Quartararo took his long lap on lap four, and came out between Bagnaia and Vinales in fifth place.
The chase of Zarco was now taken up by Miller, who was in any case under pressure from Rins. 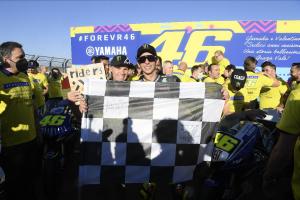 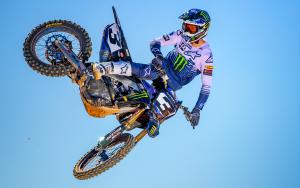 But, it was Zarco who cracked, crashing at The Vale on lap five, leaving Miller in the lead with continued pressure from Rins. 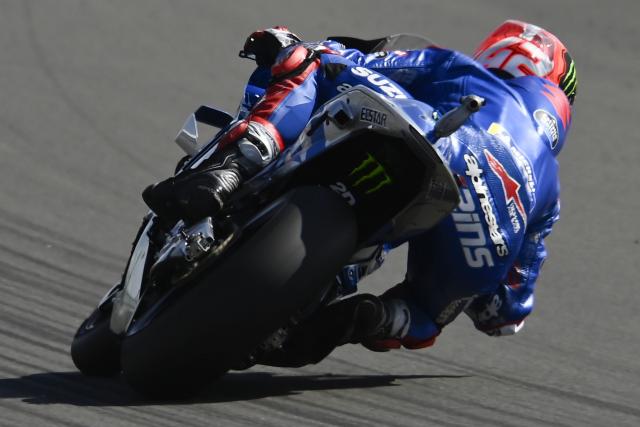 Rins made his move the next lap, lap six, for the lead. it was in the corner where Zarco had crashed the lap before, and behind Zarco’s teammate Jorge Martin passed Maverick Vinales for fifth, and then Quartararo for fourth on the next lap.
Francesco Bagnaia had taken a few laps to warm up, but by lap seven he had passed his teammate, Miller, for second. By this point, Rins’ lead was over 0.75 seconds, and Miller was under pressure immediately for third from Martin.
Bagnaia was unable to close too much on Rins for the first two or three laps after he had paassed Miller, and in fact Miller stayed in his tow, and survived the first wave of pressure from Martin.

cmgAdQueuePush( function(){ AccelerateAdManager.displayAd(“VD-mpu-3-mobile”); });
Since his long lap, Quartararo had been unable to match the speed he had in the first three laps, perhaps owing to the choice of the soft front tyre. He was passed by Vinales for fifth on lap nine, and immediately under pressure from Joan Mir on the second Suzuki.

By now, Bagnaia had started to eat into the advantage of Rins, and by the end of the first 10 laps – half distance in Silverstone – Rins was caught by the factory Ducati pairing – Miller still well in the tow of Bagnaia. 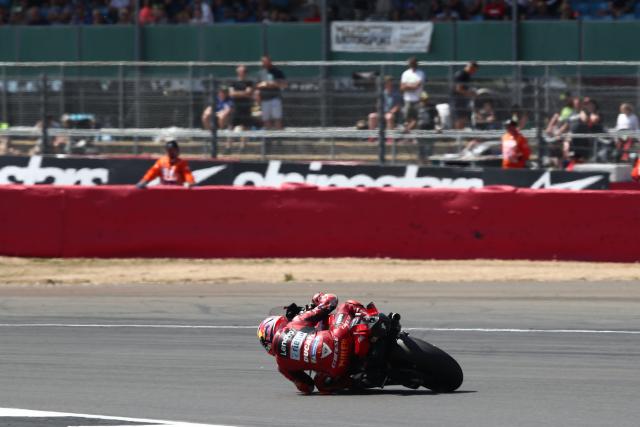 Although Bagnaia had caught Rins, it was not a slam-dunk pass. Rins made him work for it, but eventually it was the Ducati horsepower that did the work, drawing Bagnaia alongside the Suzuki into Stowe on lap 12, meaning the Italian could take the line away from his rival, and take the lead with eight-and-a-half laps to go.
All of the front four, at least, remained in contention as the race approached three-quarters distance, and at the same time Miller had planned his pass on Rins, taking advantage of the Suzuki into Village on lap 14.

cmgAdQueuePush( function(){ AccelerateAdManager.displayAd(“VD-mpu-4-mobile”); });
Behind the front three, Maverick Vinales and Jorge Martin barttled for fourth for a few laps. Eventually, Vinales was able to break through and pressure Rins. When the Aprilia rider made his move on lap 17, he was followed through immediately by Martin, sand Rins was soon dropped to fifth.
Vinales then wasted no time passing Miller for second, and by the penultimate lap the lead was in-sight of the Spaniard.
There were 0.6 seconds to close for Vinales to be able to catch Bagnaia, but already by the middle of the penultimate lap he had closed it. He made his first move in the same place he passed Miller: Village, but it was immediately rebuffed by Bagnaia, who led onto the final lap. 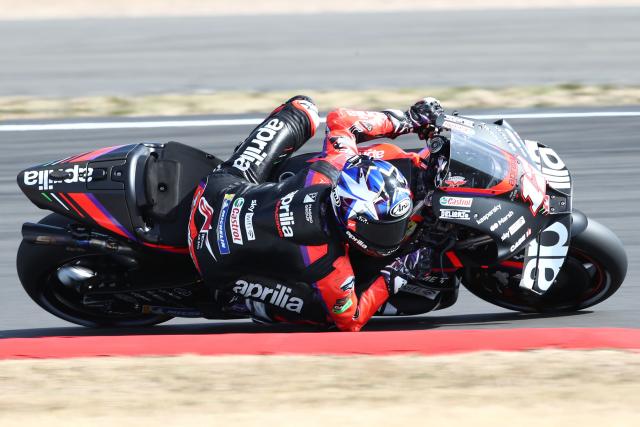 Vinales made a mistake into turn one on the final lap, meaning he had to catch Bagnaia again. Pushing on, he ran wide in Stowe, and then The Vale, which put Bagnaia out of reach.

cmgAdQueuePush( function(){ AccelerateAdManager.displayAd(“VD-mpu-5-mobile”); });
The Italian took his second win in succession, and was joined by Vinales and Miller on the podium. Enea Bastianini lost his left front wing on the first lap, but mounted a late charge to finish fourth, passing Martin, who finished fifth, on the final lap.
Miguel Oliveira completed the top six after passing Alex Rins late on. The Spaniard had looked good while leading, but once he lost it the floodgates were somewhat opened. He finisshed seventh, ahead of Quartararo, Aleix Espargaro, and Marco Bezzecchi, who passed Binder late on for 10th.
Full MotoGP results from Silverstone are below.
2022 British Grand Prix | Silverstone Circuit | Race Results | Round 12 / 21
Qualifying continued the MotoGP British GP weekend on Saturday afternoon, with the perfect conditions that had been present since Friday remaining for Saturday. Aleix Espargaro entered qualifying as the fastest rider, having topped FP3 on Saturday morning with a 1:58.254.
However, Espargaro’s pole position hopes were dampened by a high-side at the Farm corner (turn 12) in FP4. Espargaro had to be helped from the scooter when he arrived at the medical centre, but was cleared fit to ride after checks at the track, and as able to compete in Q2. 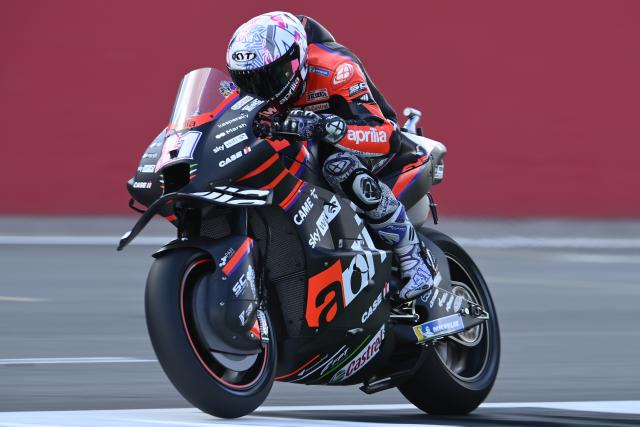 But, before Esapargaro and the rest of the top 10 from combined practice times could qualify, it of course fell to the slowest 14 riders of free practice to determine the final two positions in Q2.
It was the Ducati duo of Enea Bastianini and Marco Bezzecchi who progressed to Q2, with Bezzecchi knocking Brad Binder out at the final moment.
Fabio Quartararo set the early pace after the first Q2 runs, but he was run close, with Jack Miller just 0.001 seconds slower, and the top six covered by less than 0.2 seconds.
Stunningly, Aleix Espargaro managed with his second tyre to set the first ever sub-1:58, with a 1:57.966. Unfortunately for the Spaniard, it was not enough to hold at bay the Ducatis, and Quartararo. 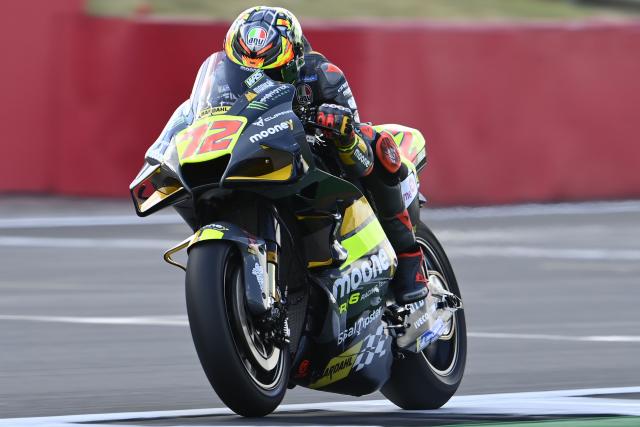 Johann Zarco set pole position, and Jack Miller was third. Francesco Bagnaia;s fifth place meant it was three Ducatis in the top six in qualifying, as well as the two Aprilias of Espargaro (sixth) and Maverick Vinales (second). Fabio Quartararo (fourth) was the only rider without an Italian bike in the top 10, as Marco Bezzecchi, Enea Bastianini and Jorge Martin qualified on the third row, and Luca Marini was 10th.
The only other two non-Italian bikes in Q2 – those of Suzuki – were 11th and 12th, with Alex Rins ahead of Joan Mir.
Full MotoGP qualifying results from Silverstone are below.

Clouds has begun to gather for MotoGP’s Friday afternoon session, FP2. but track conditions remained consistent throughout the session, as Fabio Quartararo ended the first day back after the summer break on top.

cmgAdQueuePush( function(){ AccelerateAdManager.displayAd(“VD-mpu-7-mobile”); });
Fabio Quartararo began FP2 with some difficulties. Some discomfort with the left arm of his leathers early on had him trying to adjust them on his out lap. But, he was on the pace with everyone else regardless. 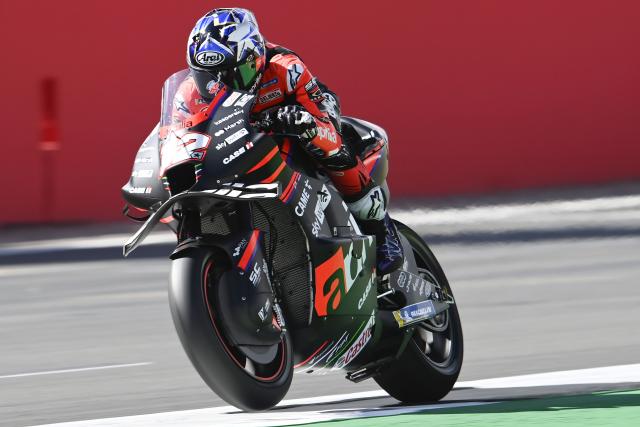 Well, almost everyone else. Darryn Binder crashed at Stowe in the first five minutes or so. He was ok, but he also fell at the corner which is the furthest from the paddock, so it was a long journey back, and he lost a lot of time in what is his first race weekend on a MotoGP bike at one of the most complicated circuit on the MotoGP calendar.
It only took 15 minutes for FP2 to become faster than FP1, as the factory Aprilia riders hit the front, with Aleix Espargaro ahead of Maverick Vinales by just over half-a-tenth-of-a-second. But, with half-an-hour still remaining, there were still the ‘time attack’ laps to come later on, as riders vied for an overnight Q2 qualification spot.
Alex Rins was the first to go for a time attack with 20 minutes to go in FP2. He got down to a 1:59.246 with his first tyre, which became the benchmark for the rest to aim at in the final minutes of the session. 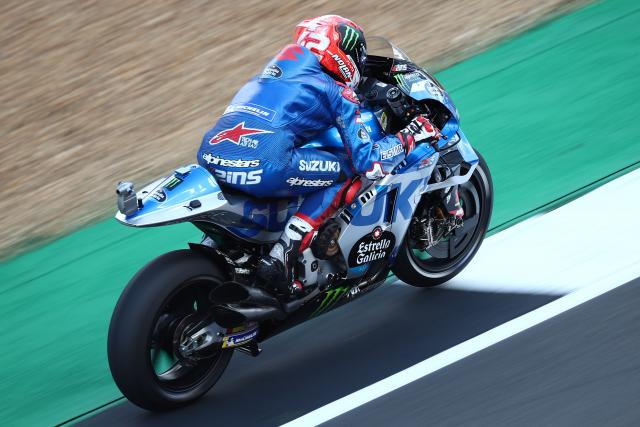 With two minutes ago, the time attacks began en masse, with Joan Mir replacing his Suzuki teammate Rins at the top, before Fabio Quartararo hit P1, and became the first rider inside 1:59 with a 1:58.946.
That proved enough for Quartararo to top FP2, and he remained the only rider inside the 1:59 mark. Joan Mir and Maverick Vinales completed the top three, ahead of Johann Zarco and Aleix Espargaro in fourth and fifth, respectively.
Miguel Oliveira was the top KTM in sixth, ahead of Alex Rins, Enea Bastianini, Jack Miller and Marco Bezzecchi who completed the top 10.
Full MotoGP British GP FP1 and FP2 combined times below.
2022 British Grand Prix| Silverstone Circuit | FP1 + FP2 Combined Results

Fine weather greeted the MotoGP riders as they headed out on-track for the first session back after the summer break, but that did not mean it was a straightforward session.
Fabio Quartararo got some ‘long lap’ practice in early. The ‘penalty loop’ in Silverstone is handily placed at the corner named “The Loop”, and Quartararo’s early recce seemed to go quite well. Of course, the Frenchman has to take a ‘long lap’ after being penalised for his move on Aleix Espargaro in Assen, in which Quartararo crashed and Espargaro was forced off-track. 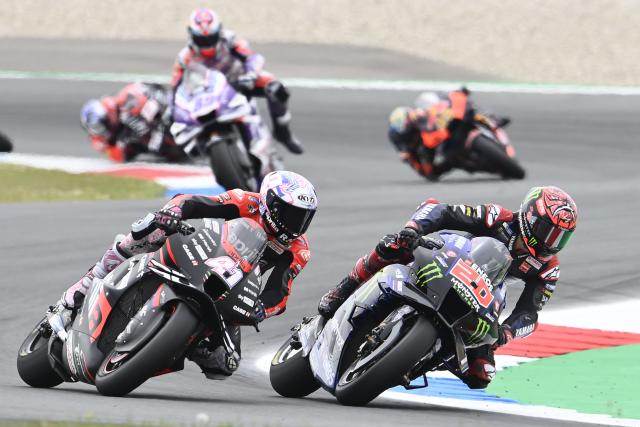 Not long after, Quartararo’s Yamaha cut out, and only moments before that Francesco Bagnaia crashed at turn four, in the middle of the Maggots, Becketts, Chapel sequence. Bagnaia was okay, and his Ducati teammate Jack Miller gave Quartararo a push back to the pits.
Furthering the complications were the conditions. A combination of relatively low track temperatures (by MotoGP’s, not Silvertsone’s, standards), low track grip and some rather strong winds (again, normal by the standards of Silverstone, but the location of the track means it is somewhat unique in this respect in on the larger scale) meant that making the bike turn and staying on the line was complicated.
The early pace for Maverick Vinales was a continuation of his impressive form from Assen. He went into the summer break with his first Aprilia podium, and he came out of the summer break by setting the pace early on in FP1. 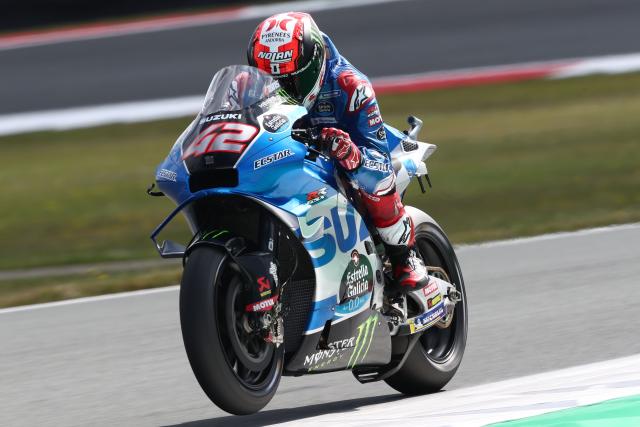 Johann Zarco became the first rider under two minutes as the chequered flag went out on the session, and Bagnaia joined him 90 seconds later. Alex Rins completed the top three, with Fabio Quartararo fourth and Takaaki Nakagami completing the top five.
Aleix Espargaro and Maverick Vinales were sixth and seventh respectively, ahead of Joan Mir, Jorge Martin and Brad Binder, who confirmed all six manufacturers in the top 10 at the end of the first session of the weekend.
Full MotoGP British GP FP1 results below.
2022 British Grand Prix| Silverstone Circuit | FP1 Results

Horner: Ricciardo not the same F1 driver he was with Red Bull - Motorsport.com

Posted on July 7, 2022
Welcome to GPFansAre you a F1 Fan? Follow GP FansEditionFormer F1 driver Karun Chandhok has urged the sport to use biofuels to ‘bring back...
Read More

Posted on June 28, 2022
Formula 1 is back in the U.S. after a one-year hiatus caused by COVID-19. Max Verstappen went the fastest in qualifying Saturday and secured the...
Read More