We use your sign-up to provide content in ways you’ve consented to and to improve our understanding of you. This may include adverts from us and 3rd parties based on our understanding. You can unsubscribe at any time. More info
The 2022 Formula One season heads into round eight this weekend with the Azerbaijan Grand Prix and the qualification process, but there are plenty of talking points within the world of F1 as the high octane sport returns to Baku. Lewis Hamilton heads into the event in disarray, looking to claw back something from what is turning into a nightmarish campaign. 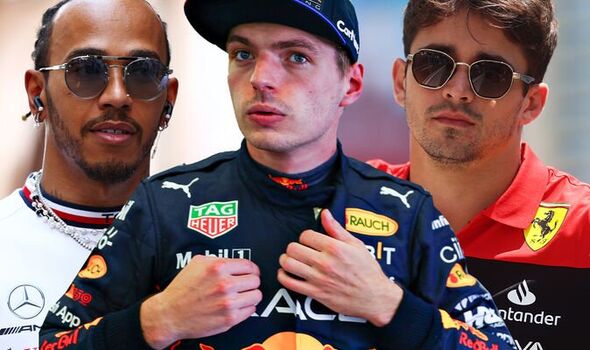 Both Hamilton and Mercedes have been warned they may need to “take some big decisions” to give their Formula One season some direction again. The Silver Arrows looked to have turned a corner in Spain but struggled in Monaco and had a tough Friday at the Azerbaijan Grand Prix.
Hamilton was left sore from his W13 suffering heavy porpoising in Baku while George Russell spoke of issues with tyres and said after second practice: “Ferrari and Red Bull, they seemed to be able to turn it on. At the moment, they just have an inherently faster car than us and we’ve done everything we can to try and catch up.”
Elsewhere, there’s trouble in paradise for Max Verstappen and his Red Bull team. It has emerged that the youngster had a chat with his father Jos after the former F1 driver fired shots at Red Bull following last month’s Monaco Grand Prix. Verstappen senior claimed in a column he wrote that the Austrian team’s strategy during the race favoured his son’s team-mate Sergio Perez.
Follow the latest F1 updates from Express Sport below…
Lewis Hamilton will not be punished for allegedly driving too slowly in a qualifying incident with Lando Norris.
An FIA statement read: “The driver [Hamilton], in evidence, stated that he did slow down in order to endeavour to be passed by car 4, to achieve a “tow’ on his fast lap, however car 4 obviously had the same intent and decided not to pass him.
“Although car 44 was slow, the Stewards note that for the lap the delta time was respected, the driver pulled over to the left and off the racing line, this occurred on a straight where visibility was not an issue and there was no potential danger at any point, to any other driver. The three cars on this portion of the track at the time were all on ‘out’ laps.”
READ THE FULL STORY HERE

Lewis Hamilton has spoken out on being investigated after an incident with Lando Norris in Azerbaijan Grand Prix qualifying.
The Briton appeared to hold up the McLaren at the end of Q2, with Norris being told on the radio to stay back because the seven-time champion will get “in trouble”.
Hamilton reacted: “I wasn’t below that out-lap pace so within the delta time so I should be able to drive at the speed I want. And I was off line, so I wasn’t holding everyone up. I was trying to get a tow because we’re so slow in the straight lines.”
READ MORE HERE

Max Verstappen has fired a warning to Charles Leclerc despite Ferrari taking pole at the Azerbaijan Grand Prix.
“I think, overall, we seem to lack a tiny bit over one lap but clearly our car should normally be quite good,” said the Dutchman ahead of tomorrow’s race.
READ MORE HERE
Lewis Hamilton will be investigated by the stewards after qualifying for slowing down unncessarily.
The seven-time champion was seen crawling around the back straight ahead of his flying lap
READ MORE

Lance Stroll has suffered a heavy crash in Q1 after he lost control at turn two.
The impact destroyed the car and brought out the red flags as the debris was cleared.
Stroll kept his 19th place when the session was eventually resumed.
READ MORE

You can follow all the action from qualifying for the Azerbaijan Grand Prix on our special live blog here
However, stay here for all the latest news stories throughout the day in what promises to be a dramatic afternoon.

Yuki Tsunoda has warned Lewis Hamilton and Mercedes are not given any preferential treatment in the midfield despite winning multiple F1 crowns.
In an exclusive interview with Express Sport, Tsunoda warned Hamilton is a ‘similar enemy’ to others and is just another driver to beat.
He said: “For me, even fighting with me or the midfield, it’s a similar enemy as other drivers. For me, it’s the same.
“Even if it’s Lewis Hamilton in front of me or behind me it’s the same, one of the other drivers I have to beat.”
READ MORE

F1 drivers and teams are ‘not happy with the FIA’ as tensions continue to boil in Azerbaijan.
Andrew Benson, BBC F1 reporter has claimed teams are ‘dissatisfied’ with decisions this season and their handling with F1 both on and off track.
He said: “Yesterday in the press conference, drivers were asked are you happy and satisfied with the way the FIA president and the FIA are running the sport.
“None of them wanted to answer, it was really awkward… Long story short, no one is really happy with the FIA at the moment.”
READ MORE

Sergio Perez has the slight advantage into qualifying after topping his second session of the weekend.
The Mexican set a 1:43.170 to edge out Ferrari’s Charles Leclerc and Max Verstappen.
The Mexican could be one to watch in qualifying as he also edged his team-mate in FP1 and FP2.

Charles Leclerc is fastest with just under 20 minutes left of final practice. The Ferrari star has set a 1:43.514 to go one-tenth faster than Max Verstappen
Sergio Perez currently lies third-fastest in the other Red Bull.

Damon Hill has also warned Lewis Hamilton to simply ‘prepare for next year’ as Mercedes issues continue.
He said the team would need to consider doing a ‘major revamp’ to their car to compete for wins later on this season.
However, this would mean giving up on any title chances and refocussing on next season.
Hill told Sky Sports F1: “I think it is looking more like they have to sort out what it is they’ve done wrong now, get a good handle on it from the middle of the season and prepare for next year.
“I’m not saying they can’t win races but as far as the title goes they’re a long way off.”
READ MORE

Sky Sports host Damon Hill has warned Mercedes bosses need to take some ‘big decisions’ over the direction of their car.
He warned the team were trying everything they could to get back towards the front but stressed they are having limited success.
He said: “They need to ask themselves some big questions and take some big decisions, I think.
“A season is never a write-off. You’ve got lots of races coming up and still a lot of time, but they need to find a direction.”
READ MORE

Yuki Tsunoda has not been affected by Sergio Perez’s new contract extension despite delayong any futire Red Bull driuve until 2025.
The 22-year-old said he was still happy at Scuderia AlphaTauri and was just focussed on scoring points.
In an exclusive interview with Express Sport, he even made comparisons to Mercedes star George Russell.
he said: “It’s not a bad thing to be in the midfield team. Because I can learn, a good example was George Russell.
“He was in Williams quite a long time and he was able to perform straight away when he jumped to Mercedes.”
READ MORE

Lewis Hamilton revealed he was in pain during Froday practice as Mercedes contiunue to suffer bouncing issues.
The Silver Arrows struggled with the problem last week in Monaco but the issue seems to have carried over to this weekend.
When asked what the hardest thing was aboit Friday practice, the seven-time champion said: “Bouncing.”
He added: “I’ll get by. I’m a bit sore but yeah. We’re hitting some serious speeds at the end here and it’s bouncing a lot.”
READ MORE

Yesterday, Christian Horner warned some of Red Bull’s rivals have already posted complaints over Max Verstappen’s rear wing.
The reigning champion’s wing was seen flexing in the wind in FP1 which raised some eyebrows.
When asked if Ferrari and Mercedes may look at protesting the wing, Horner said: “I think they have already done that… This does not give you a performance advantage.”
READ MORE

Max Verstappen has admitted he tried to cool down his father Jos after a furious rant online after the Monaco Grand Prix.
The former Benetton man claimed red Bull did not help Verstappen in Monaco and used the startegy to play into Perez’s hands.
He warned their decisions had thrown away 10 points in the championsip at a time when Ferrari still has the fastest car.
However, Max Verstappen has tried to defuse the situation, adding: “He just wants to see me win. It’s his opinion.
“I also told my dad that Sunday’s events were a result of Saturday, when that red flag ruined my qualifying.
“That was the biggest problem, because in Monaco you can’t overtake. Fine, that was one race, we’ll just move on now.”
READ MORE

Posted on August 5, 2022
You are logged in. Benefit directly from all the benefits of your account:Become part of the largest racing community in the United Kingdom. Create...
Read More

How porpoising could trigger a qualifying dilemma in F1 2022 – Motorsport.com

Posted on June 6, 2022
Until teams find permanent solutions, they might face a profound qualifying dilemma in 2022’s opening races.As explained in depth over the past week, porpoising...
Read More