The home straight of the 2022 Formula 1 season is coming into view, so to make sure you get your fill before the end of the season, you can watch the Sao Paulo Grand Prix on F1 TV Pro*.
Max Verstappen now stands alone as the driver with the most victories in a single season in Formula 1 history, having taken his 14th win of the year last time out in Mexico City – and there are two more opportunities for him to extend that record further in the remainder of the year.
He will have a tight chasing pack behind him this weekend however, with Mercedes’ Lewis Hamilton having taken second place for the second race in a row, and is looking closer than ever to challenging for his first win of the season.
With F1 TV Pro, you’ll have absolutely everything you need for what is almost always one of Formula 1’s most popular and entertaining races – with Hamilton and Verstappen having served up an all-time classic between them last year at Interlagos.
Put yourself at the heart of the Sao Paulo Grand Prix action with F1 TV Pro. Click here to sign up! 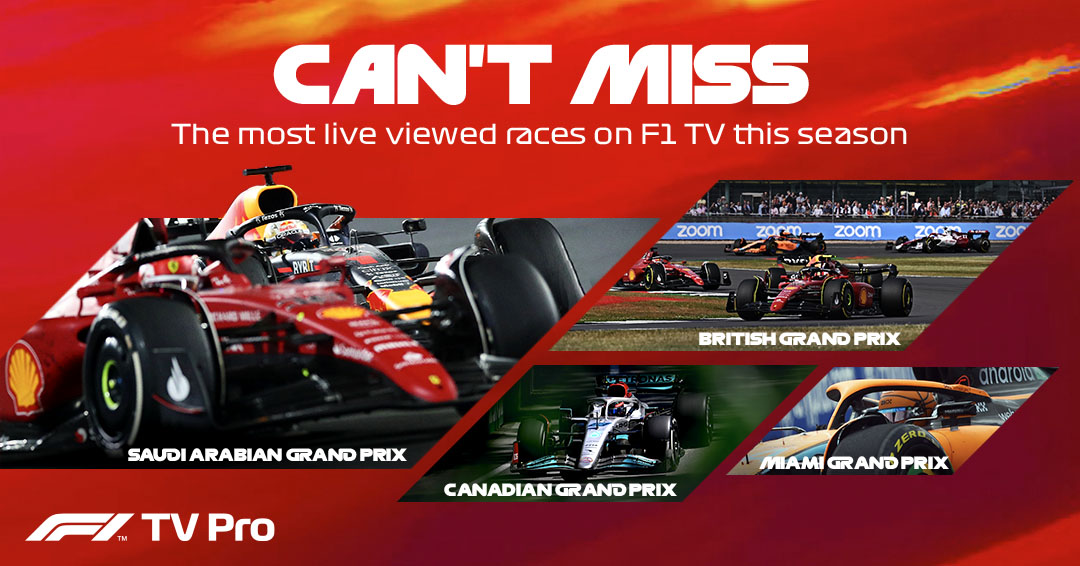 Don’t forget, it’s an F1 Sprint weekend this time around at the Sao Paulo Grand Prix – so qualifying will take place on Friday, the Sprint will be on Saturday and the race will be on Sunday, so there is even more for you to watch this time around.
Be it in qualifying, Sprint or the race, can get up close and personal with the drivers courtesy of F1 TV Pro and their range of on-board cameras, taking you right inside the cockpit.
The twisting nature of the Interlagos layout as well as its long straight makes it a popular destination for the drivers for the challenge it presents, as well as the passionate Brazilian crowd in attendance.
There is still plenty to be decided further down the championship standings, with Sergio Perez and Charles Leclerc locked in a battle for second in the Drivers’ standings, while Ferrari and Mercedes still need to settle who will finish second in the Constructors’ Championship.
F1 TV Pro viewers can hear the action live by tuning into F1 TV’s Team Radio feature, following conversations between drivers and engineers up and down the field as race strategies unfold in real time.
Hamilton and Verstappen played out one of their best battles of the year last season at Interlagos, and with Mercedes on the rise again, the two could yet find themselves at the front again and duel for victory in Brazil this weekend.
F1 TV Pro viewers can see everything that goes on in the race, and you can take full advantage of everything on offer by being able to watch across multiple devices. You will also have a choice to listen to the international feed or switch to F1 TV’s live team.

Away from Formula 1, there is a whole host of up-and-coming racing talent in Formula 2 and Formula 3 looking to carve out their own paths to the pinnacle of motorsport.
F1 TV Pro gives you access to live stream and replay every since F2 and F3 race to help you get familiar with the names we may well see on the Formula 1 grid in the years to come – with F2’s Logan Sargeant set to graduate to Williams in 2023, champion Felipe Drugovich taking up a reserve role with Aston Martin and others firmly placed within F1 teams’ junior ranks.
As we hurtle full speed towards the season finale in Abu Dhabi, F1 TV Pro viewers can watch every session live and ad-free, and catch up on demand.
And by being able to watch online, through the F1 TV app, Amazon Fire TV, Android TV, Roku and Apple TV, you won’t miss a single second of the action. With these multitude of options at your fingertips, you could even create your very own pitwall alongside F1 TV’s Data Channel.
Subscribe now* to watch all the live action unfold from the Sao Paulo Grand Prix at Interlagos! Happy viewing!
*Available in select territories only. T&Cs apply.

Horner gives F1 benefit of the doubt: 'It's right on the limit' – GPblog

Posted on August 28, 2022
Close enenGPblog.com The 2022 Formula One season will feature no less than 22 Grands Prix. Two more race weekends seem to be coming up...
Read More

The 10 Worst Formula 1 Teams of All Time – Jalopnik

Posted on September 18, 2022
This year’s FIA Formula One World Championship is all but decided with six races to go. Red Bull Racing’s Max Verstappen is not only...
Read More

Posted on September 14, 2022
It would make the life of a Formula 1 team that bit easier if their drivers didn’t have pesky preferences and a personality all...
Read More