Racing News, Analysis, History, Schedule, Rumors
If you are new to Formula 1, you have probably heard the term “DRS” while watching races and wondered what it meant. Don’t worry, we all have been there. Let’s run through a quick overview of what DRS is and answer some basic questions.
The Drag Reduction System (DRS) is a device used by drivers to partially open up the car’s rear wing to reduce drag and gain speed, allowing them to close the gap between themselves and the cars in front.
The rear wing is one of several components on F1 cars. It is created to generate downforce to provide grip, allowing cars to accelerate and take corners at very high speed. Consequently, the grip causes turbulence (or drag) that reduces the car’s top speed.
Embed from Getty Imageswindow.gie=window.gie||function(c){(gie.q=gie.q||[]).push(c)};gie(function(){gie.widgets.load({id:’Y1f_1P0eQbZgGQyt4boJYQ’,sig:’l_j7WUBcOKi67BQ4q3obgZje4eS58O3K0WAFb-2cRgI=’,w:’594px’,h:’334px’,items:’1177413080′,caption: true ,tld:’com’,is360: false })});
When activated, the DRS moves a flap on the car’s rear wing horizontally, allowing the air to rush through. This reduces the car’s aerodynamic resistance, thus increasing top speed. This feature enables more wheel-to-wheel racing and overtaking attempts.
The driver manually activates the DRS by pressing a button on their steering wheel, which deactivates once they start braking. However, the driver can only activate it if they are within one second of the car ahead of them. Hence, the race leader cannot use DRS unless they are behind lapped cars.
Embed from Getty Imageswindow.gie=window.gie||function(c){(gie.q=gie.q||[]).push(c)};gie(function(){gie.widgets.load({id:’QkoJwHeVShNAib3BmV1Gyg’,sig:’mBjTx0PTtNp1DDmjX86R7ppdZKt2FUT5H9Dzb6Kc0YA=’,w:’594px’,h:’335px’,items:’1240523787′,caption: true ,tld:’com’,is360: false })});
A sensor at the DRS detection zone, just before the activation zone on the track, automatically detects the gap between two cars to determine whether the following driver is allowed to use DRS. If they are eligible, a light will automatically appear on the driver’s steering wheel. The driver can then enable the device and open up their rear wing once entering the corresponding straight. 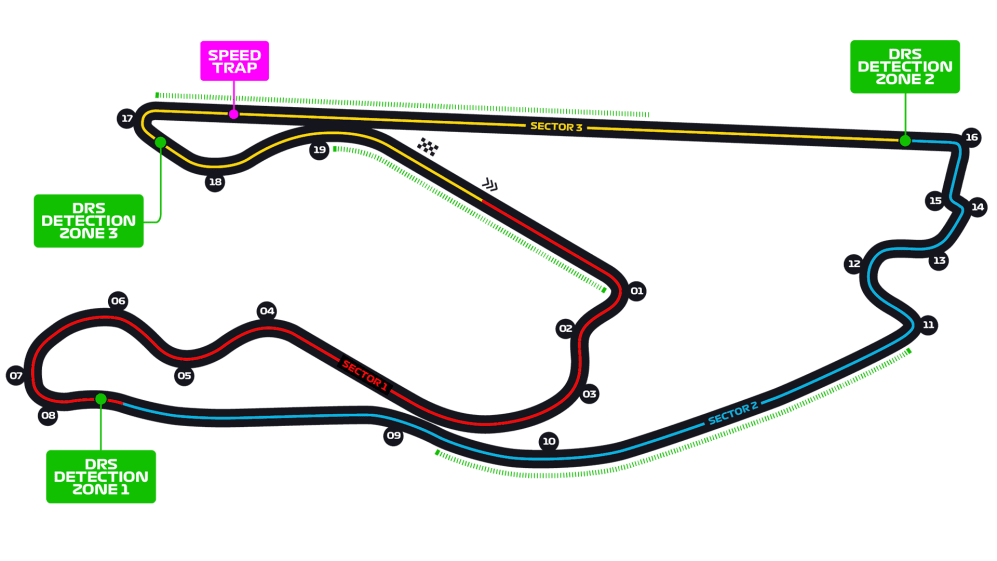 While it varies by track, each circuit has at least one zone, with some having up to three, such as the Miami International Autodrome in the United States. However, the 2022 Australian Grand Prix featured four DRS zones at Albert Park Circuit for the first time in F1, but only two detection zones were used in the race.
Official FIA circuit map for this weekend is in – and four DRS zones is confirmed! ✅ #F1 #AusGP pic.twitter.com/bmKCZkeQiY
— Luke Smith (@LukeSmithF1) April 5, 2022

Although fans are divided on whether DRS is a good thing for F1, there is no doubt that it adds drama and suspense to the race. The 2022 Saudi Arabian Grand Prix was a great example when Max Verstappen and Charles Leclerc played mind games in their battle for victory and attempted to out brake each other in the final corner to let the other pass the detection zone first to gain the DRS advantage. Eventually, the Dutch driver won that battle that put fans on the edge of their seats.
After you… 😇
No, after you… 🧐
The battle for DRS between @Charles_Leclerc and @Max33Verstappen 😅#SaudiArabianGP #F1 pic.twitter.com/8PaKNs8COP
— Formula 1 (@F1) March 28, 2022

READ NEXT: Formula E – A Day At The London E-Prix

Posted on June 20, 2022
Alonso qualified second in the wet on Saturday in Montreal but in the race he slipped back to seventh on the road behind teammate...
Read More

Posted on July 27, 2022
Nicholas Latifi is the only full-time Formula 1 driver who has not scored a point this season.Judging drivers by the championship table alone is...
Read More