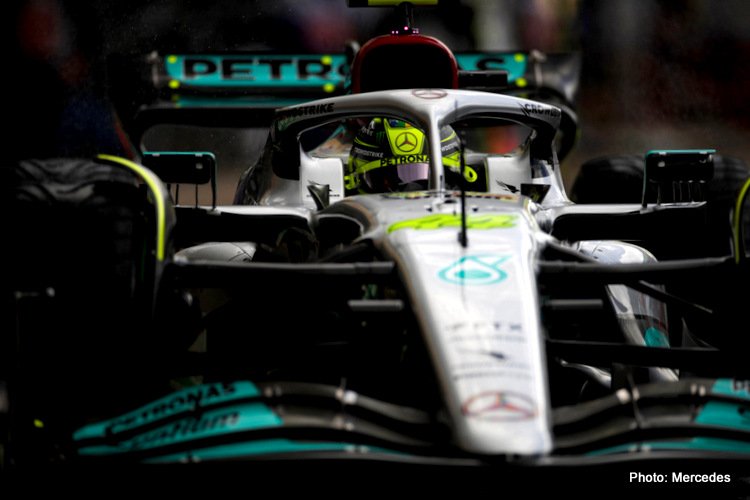 Word in the paddock has been that if Mercedes were going to be potent, they would be at Silverstone but by the time the spray had settled on a tense and unpredictable session this afternoon, the World Champs were lacking a full second when the big guns came out in a wet Q3.
Nevertheless, spurred on by their home crowd both Hamilton and Russell will secretly be wishing for a podium, the latter looking to continue his incredible streak of nine top-five finishes, this season far, to ten.
In the sister car, Hamilton is enjoying a resurgence of form since Baku, including a podium last time out in Montreal which he will want to repeat at a venue where he has won an astounding eight times in the past.
Hamilton summed up his Saturday: “The team have worked incredibly hard to bring updates to the car and we have a bunch of new aero furniture around the car and it has improved. But we still have bouncing in the high-speed corners which is where, particularly the Red Bull, is pulling away from us.
“In the rain, we were fighting for the front row; all the way until that second to last lap we were up there. We backed off to charge the battery and go into a racier mode for the final lap but that was just when the rain started to fall heavier and it cost us.
“I was so hopeful because we have this incredible crowd and we were in the fight, I was feeling great. We’ve got a great race car and fifth isn’t the worst place to start, in previous races I’d have been happy with P5 but it’s the British Grand Prix, you’re hopeful for more.
“I’ll try and pull something special, I really appreciate the support here – the fans were amazing,” Hamilton said in the team report. 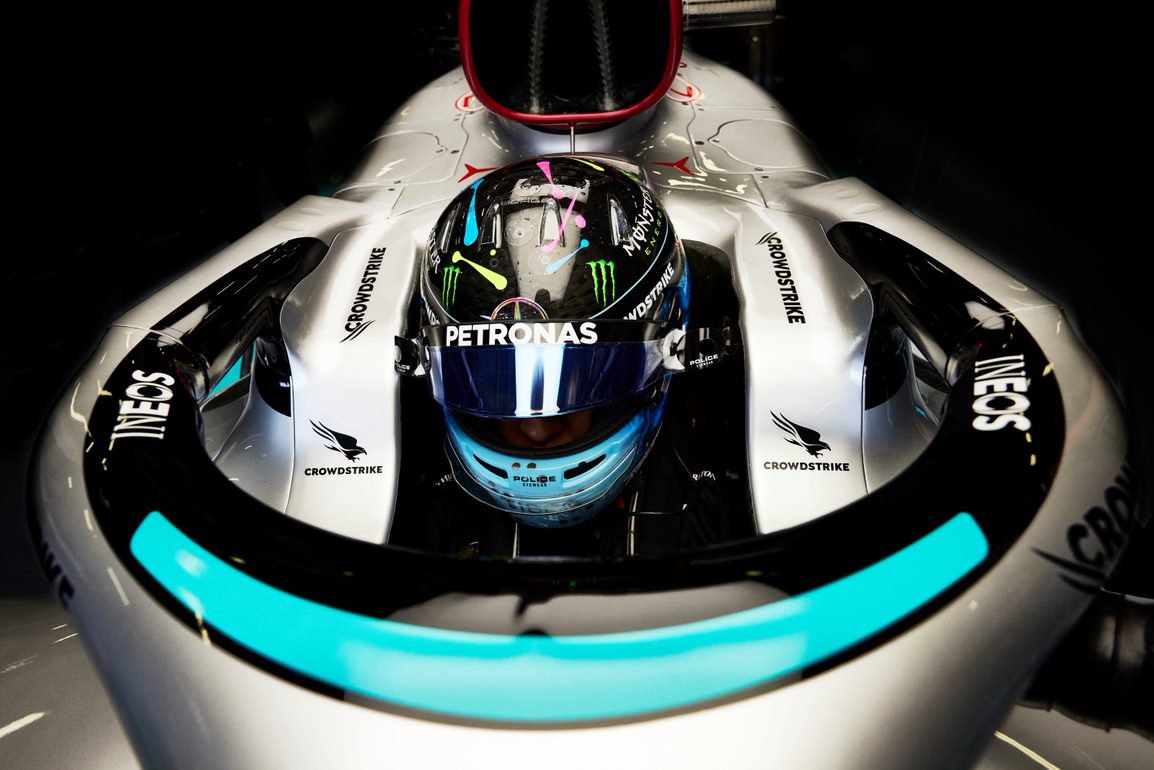 Only a tenth slower than his teammate was Geroge Russell but in the tight midfield that’s the difference between fifth and eighth. Notably, Hamilton was 1.012s down on the pole-winning time of Ferrari’s Carlos Sainz.
Russell said in the team report: “In Q1 I was feeling really well in the car, very confident but in Q2, it felt slightly worse and then in Q3, I struggled for confidence in the car, made a mistake and it was tough to recover from there.”
“It was tricky for everyone out there but I’m slightly disappointed we didn’t have a better qualifying session, we didn’t expect to fight for pole but more was possible. In FP3 we looked very strong with good pace in the dry and we felt like we made good progress.
“We know that we have a much faster race car than qualifying so let’s see what we can do, starting P8 puts us on the back foot so we need to get through those midfield cars as quickly as possible.
“In the dry and in race pace, we feel we have a car than fight Red Bull and Ferrari so we’ll be giving it everything,” concluded Russell. 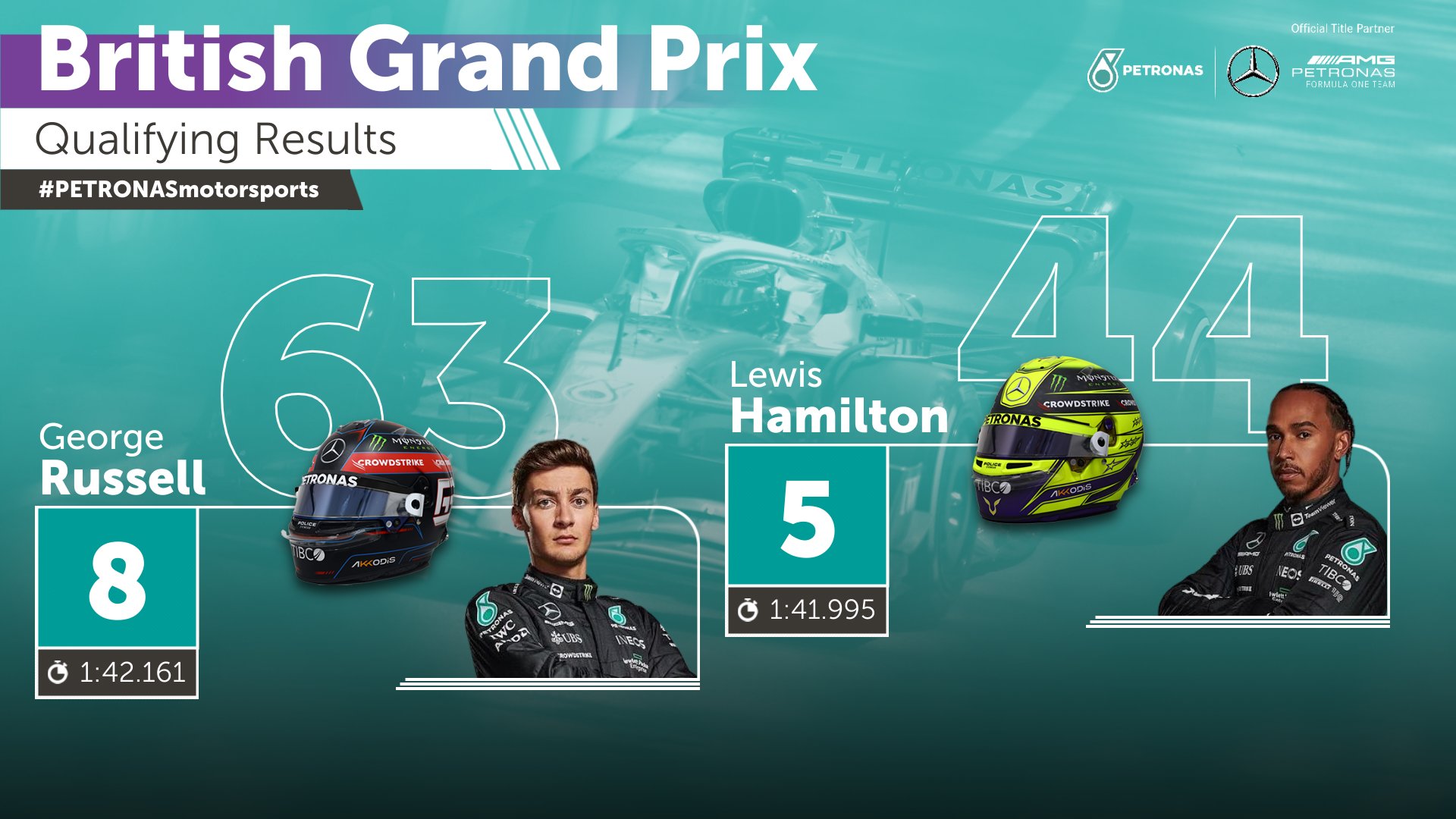 Despite the positive vibes from the drivers, Mercedes trackside boss Andrew Shovlin knew they might have done better: “We’re disappointed with the final positions as we were closer to the front in the first and second session.
“Ultimately we didn’t get the laps together when the conditions were at their best. We’d backed both cars off on the penultimate lap thinking we’d push at the end but the rain picked up a little and we just didn’t have the pace.
“However, we have seen signs of progress with the car over the weekend that are keeping us encouraged. We made a few changes overnight and the drivers were both much happier with the high-speed performance in final practice earlier today.
“Our long run was decent on Friday but it was the high-speed corners where we were losing, so hopefully the improvements have carried through from low fuel to high fuel.
“So, not quite the grid positions that we had hoped for but we’re still optimistic that we can bring home some good results tomorrow. The fans have been brilliant all weekend and we’ll hopefully be able to give them something to celebrate,” concluded Shovlin.
© 2022 | PEEVEEMedia

BEYOND THE GRID: Russell talks wanting to win Silverstone, life with Williams, racing Hamilton and much more - Formula 1

Posted on August 1, 2022
Verstappen charged from 10th place on the grid to win at the Hungaroring on Sunday, extending his lead at the top of the drivers’...
Read More

Ocon: Only Hamilton has done a better job as Alonso's F1 team-mate – Autosport

Posted on September 29, 2022
The Frenchman looks set to lead the Alpine team in 2023, following the departure of Alonso to Aston Martin.But while Ocon is raved about by his team,...
Read More

Posted on October 21, 2022
In what many consider to be motorsports golden era, Formula One divers used to regularly compete in other global motorsports events.  Yet in recent...
Read More