The FIA has made changes to Formula 1’s roll hoop regulations for 2023 following an investigation into Alfa Romeo driver Zhou Guanyu’s accident at the start of the British Grand Prix.
Zhou’s car was launched into the air after being hit by George Russell’s Mercedes, which was pitched left when it hit Pierre Gasly’s AlphaTauri.
The Alfa Romeo landed upside down on the track and continued to slide. After being pitched into a roll by the gravel, it cleared the tyre wall and came to rest between the barrier and the safety fence. The roll hoop failed in the crash, but Zhou was uninjured.

The FIA has conducted what it calls a “detailed analysis” of the accident, including the rescue and car recovery process.
It said “one item that was highlighted was the performance of the roll hoop, which came off the chassis during the accident”.
Three key findings were highlighted, the first of which is that the “pointed top of the roll hoop dug into the Tarmac, which contributed to the high horizontal force which led to it breaking off”.
The second is that the wording of the regulations currently “allows teams to homologate their roll hoops with forces acting through a lower point than intended”.
This forces referred to are the load tests required to homologate the car. The lower down the force is applied, the stronger the structure there is likely to be, meaning that it could fail were this applied higher.
The third conclusion is that a “significant increase in roll hoop strength” is required.
As a result, several changes have been made to the roll hoop – called the ‘principal roll structure’ in the regulations – and associated rules. These have been ratified by the FIA World Motor Sport Council.
The roll hoop now requires a “rounded top”. This is to reduce the chance of it digging into the ground, as it did at Silverstone.
The exact wording of the new roll hoop regulations have not yet been revealed, with the first issue of the 2023 technical regulations published today featuring the same wording as the ’22 rules. This will be updated in a future issue of the technical regulations. 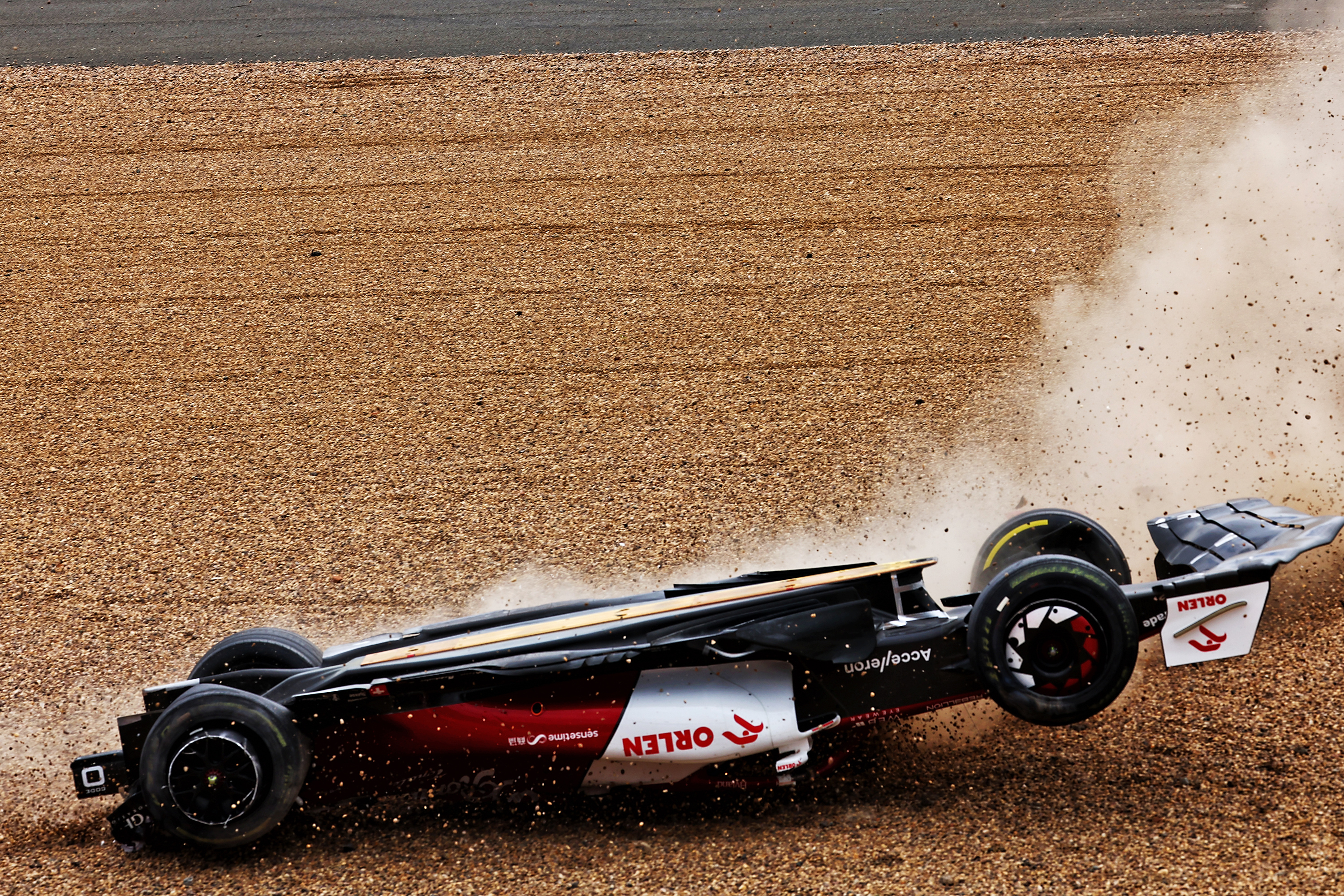 The changes are likely to mean the single-spike roll hoop design used by Sauber is either banned or heavily modified to achieve the required rounded shape. The other nine teams all run the more rounded design already rather than the single-spike – although both concepts must pass the same load tests.
To tackle the problem of the homologation load test potentially being applied too low, a minimum height for this to be applied will be brought in.
The FIA will also introduce a new load test that will apply a forward force to the roll hoop. The new tests will be carried out using what the FIA calls “a calculation”.

There is also the intention for a “significant overhaul of the roll hoop tests” in 2024 to make sure that cars can resist more severe loads.
FIA president Mohammed Ben Sulayem said that the Zhou crash demonstrated the need for these changes.
“It was evident that an update to the requirements for the roll hoops was needed after the crash of Zhou Guanyu at Silverstone,” said Ben Sulayem.
“While this incident showed us all how remarkable the safety systems in Formula 1 are, it also proved once again that we must continue to innovate and pursue safety matters without compromise.”
Daniel Ricciardo’s made clear he’s open to a year as a top Formula 1 team’s reserve driver in 2023. Lewis Hamilton says he’s too good for that
Clouds of brake dust are a common sight in Formula 1. But should they be?
Lewis Hamilton will be starting the Formula 1 Italian Grand Prix from the back of the grid because of an enforced engine change
Jean Alesi claimed his first – and only – F1 win on an emotional day at the 1995 Canadian Grand…
Colton Herta is not eligible for a Formula 1 superlicence as it stands. But circumstances – and precedents outside of motorsport – do exist where he could be granted one without making such access a free for all
Ferrari is arguably in a position in Formula 1 where it needs some reflection to take the final step. Gary Anderson says instead of being honest when something goes wrong, the team seems to have found a way to absolve itself of responsibility
The Race started in February 2020 as a digital-only motorsport channel. Our aim is to create the best motorsport coverage that appeals to die-hard fans as well as those who are new to the sport.

Williams: Lack of confidence in the car behind Latifi F1 struggles – Motorsport.com

Posted on July 3, 2022
Latifi struggled to match the Mercedes bound George Russell during his first two seasons in F1, but in the first seven races of 2022...
Read More

Posted on September 16, 2022
Ferrari’s announcement that Robert Shwartzman will drive one of its Formula 1 cars in first practice at the United States Grand Prix next month...
Read More

Posted on August 5, 2022
Racing News, Analysis, History, Schedule, Rumors If you’ve been following Formula 1, live in the US, or have a keen interest in television ratings,...
Read More

Posted on August 7, 2022
Our car experts choose every product we feature. We may earn money from the links on this page. Florida native is second in the...
Read More