The first part of McLaren’s 2022 Formula 1 season was derailed by an unusual problem that initially appeared in Bahrain testing in March and was not fully resolved until the team’s Spanish Grand Prix upgrade package two months later.
The front brake overheating problems it suffered were the result of a “strange phenomenon” that prevented adequate cooling airflow reaching the discs, according to technical director James Key.
McLaren introduced the definitive fix as part of its Barcelona package, with the carbonfibre brake cover replacing the rapidly-produced titanium shroud that had seen it through the early races. Gary Anderson explains the changes, which are pictured below, in full here. They worked well, and led to a marked reduction in front brake temperatures. 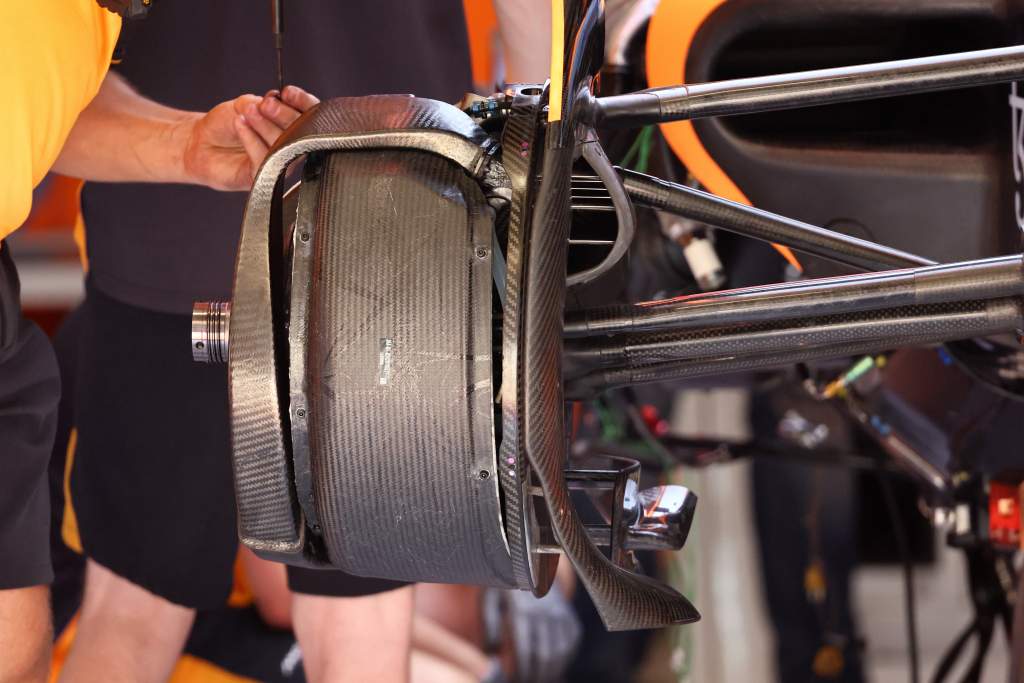 Key described it as an “oddball” problem that took time to replicate in order to understand how it should be fixed.
“Fundamentally, it was a pressure imbalance in the system, which we hadn’t picked up either theoretically or in our repeat tests,” said Key when asked by The Race to explain the problem.
“You’d end up with a pressurisation within the duct that was, at times, potentially greater than the flow into the duct.
“Effectively, it either stalled completely or even reverse flowed so you’re trying to cool the disc with really hot air. 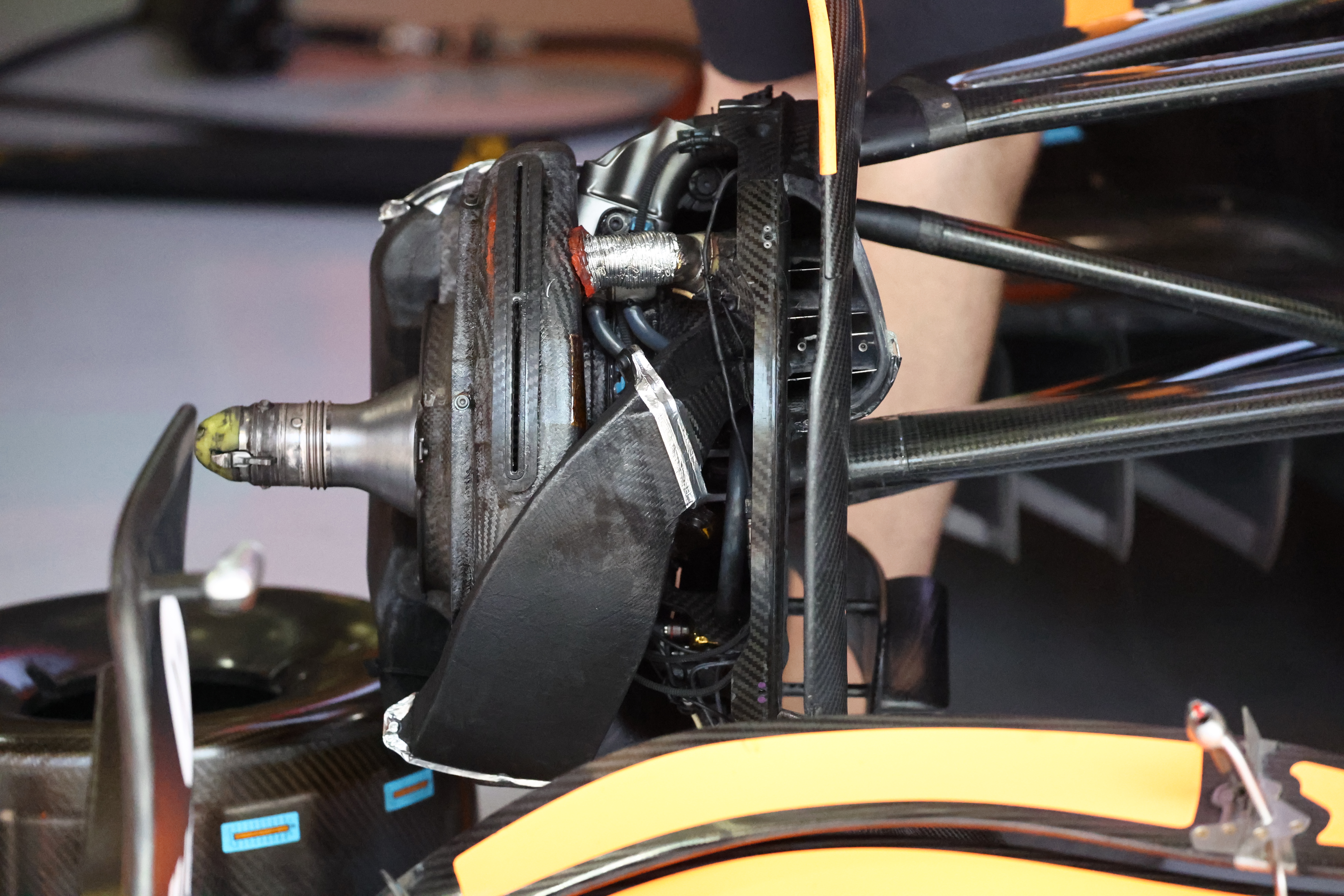 “A really strange phenomenon, I don’t think any of us had seen it before. But you had to run a certain set of circumstances to see that, and we did it in CFD in the end.
“Nothing stacked up, none of it made any sense. When you looked at what was going on, it’s like ‘well, this all seems back to front’. It turns out under those circumstances, it was, so we did replicate it.
“That’s really what led us to the design that we’ve got now to make sure that we completely remove that issue.
“We’ve certainly added a few processes to our brake duct development in future. It was a real oddball.
“And this is really why we didn’t pick it up [in Barcelona testing] so well because that track doesn’t encourage that particular set of circumstances. But Bahrain did.”

Key also paid tribute to what he called a “heroic effort” to create an initial fix for the problem that was brought to the Bahrain Grand Prix.
During the test at Sakhir, McLaren made modifications on-site and also flew in new parts from its Woking base – including a first version of the titanium brake cover.
That mitigated the problem, allowing it to improve its mileage each day with 50 laps on day one, 60 on day two and then 90 on day three, but the car wasn’t in a condition where completing a race distance was possible.
But the Bahrain upgrade was a big enough step to allow both Lando Norris and Daniel Ricciardo to finish the race, although by this time the team had lost valuable time in building understanding of its car while it was troubleshooting the problem. 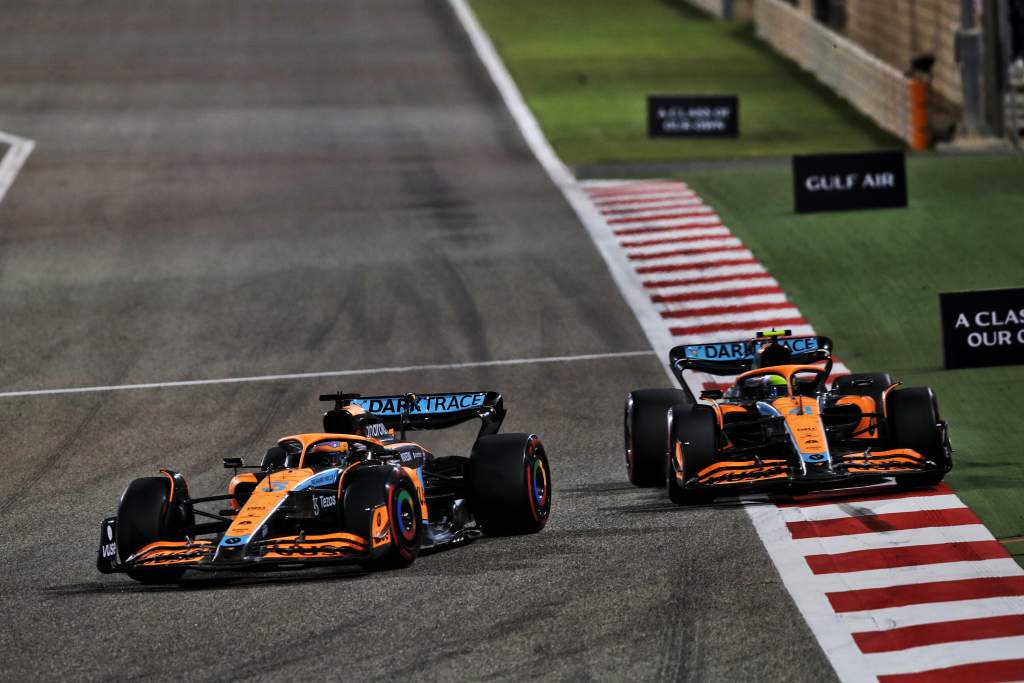 “The developments we brought to Spain did what we expect them to do,” said Key. “We were quite a bit cooler on the whole front corner and it’s worked out as hoped.
“I have to say, the heroic effort of the whole team and all those involved to get something which took us from about 10 laps to actually surviving for five races by welding together bits of titanium and making a new brake duct for the first race was outstanding. And it’s held us in really good stead.
“It wasn’t quite as ‘Heath Robinson’ as that, but it was kind of akin to that. The really rapid turnaround in a way helped us understand a little bit of the issue.” 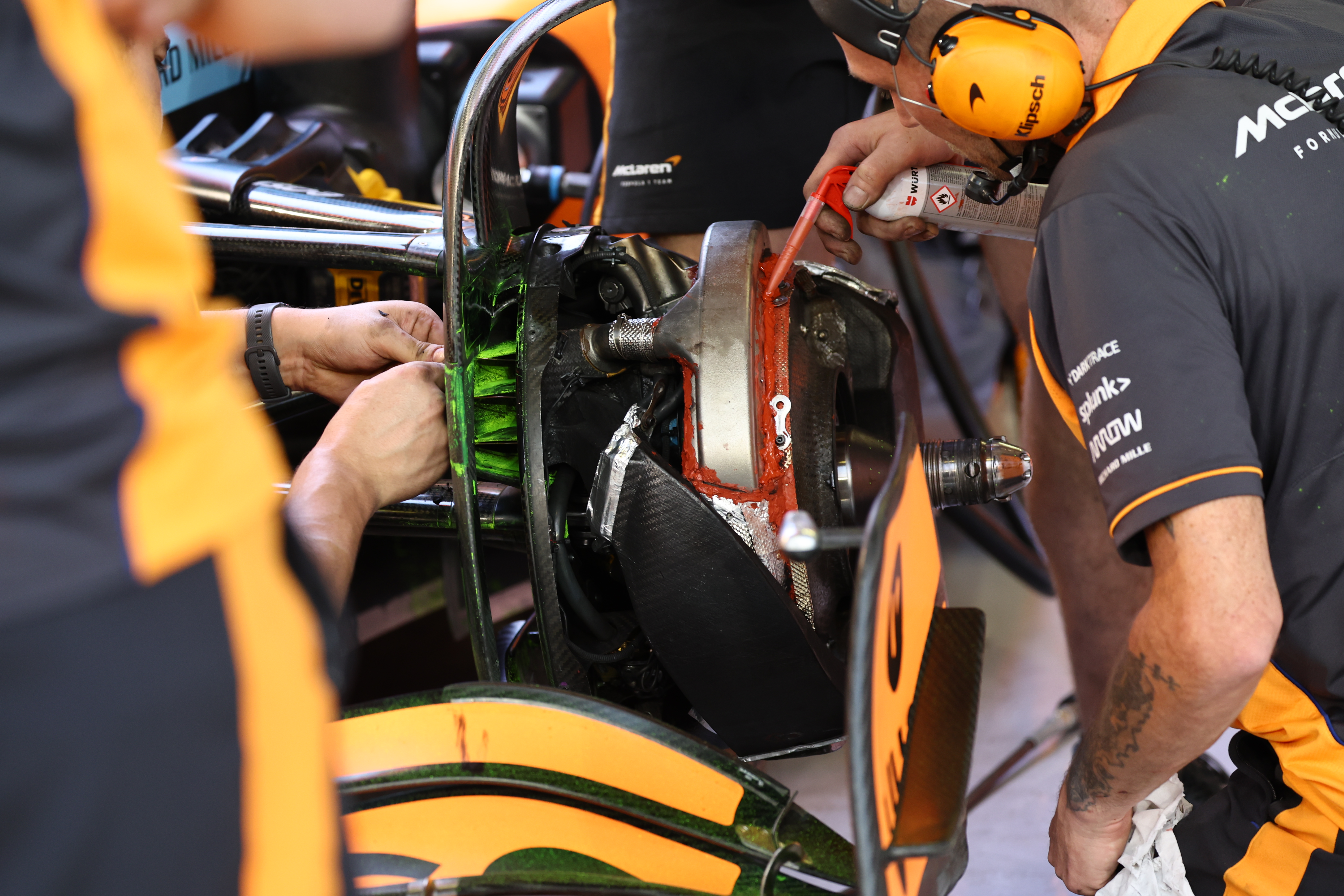 With any cooling duct, you need the inlet to be at a higher pressure than the outlet. That’s why the radiator inlet on an F1 car points forward and the exit rearwards.
This gives you airflow through the duct that then takes heat away from anything placed within it. The size and efficiency is dictated by how much heat you have to remove.
Looking back in time, I remember Patrick Head talking about one of his first ground effect attempts and the fact it wasn’t working as planned. Williams then discovered that the radiator flow was going the opposite direction to that expected.
This is because the low pressure under the car was pulling the airflow into what should have been the outlet on the top of the sidepods, through the radiator and around the floor’s leading edge underneath the car. So sometimes, all is not as expected.
A radiator cooling system should be relatively simple, but a brake duct is not. It’s all so tightly integrated, especially now with the teams are not allowed to generate outwash of the used hot air through the wheel that everyone has to turn the same-specification wheels and hubcaps. This could very easily be what led to McLaren’s miscalculations when defining the new brake cooling system.
On the inside of the wheel, you have to have the inlet and the outlet. The inlet faces forward in the high pressure area where the airflow spills off the front tyre and the exit is around the periphery of the rim to allow the hot, used air to sweep over the inside sidewall of the tyre. To a very small extent, this helps heat the front tyre, with this flow then pulled into the low pressure behind the front tyre.
It is what happens between that inlet and exit that is complicated. The main cooling flow needs to be presented to the inner diameter of the disc. It should then flow through the holes that are drilled in the disc exiting at the outer diameter of the discs.
Some flow will be washed over the disc faces and some flow will be passed across the outer surface of the caliper and brake pads. If the pressure differential across any of these cooling requirements is not working as the simulation models indicate, then the flow could go in the opposite direction or simply not bother going there at all.

When we talk about efficiency, it is all about getting more from less and that is especially true of the airflow that is used for cooling any part of the car.
It’s not just about fitting a bigger brake duct, it’s about making it work as planned. But as McLaren learned this year, it’s also very easy to trip up in an area as complicated as the brake duct.
Sergio Perez was again the faster Red Bull driver in the Azerbaijan Grand Prix build-up and blitzed the early laps after grabbing the lead. But in the end he was comfortably beaten by team-mate Max Verstappen. Mark Hughes looks at why, and how the race might have panned out had the Ferraris continued
Red Bull Formula 1 team boss Christian Horner believes rival team chiefs are deliberately encouraging their drivers to make a big fuss about the ride quality of the 2022 F1 cars
The Azerbaijan Grand Prix delivered another twist in the 2022 Formula 1 title tale and produced a big batch of winners and losers
Charles Leclerc says Ferrari’s sudden Formula 1 reliability crisis is hard to understand given how the team started the 2022 season
Ferrari’s Formula 1 world championship hopes suffered another enormous blow as Charles Leclerc retired with engine problems while leading an Azerbaijan Grand Prix that ended with Max Verstappen and Sergio Perez first and second for Red Bull
With a row over the possibility of rule tweaks to ease 2022 Formula 1 cars’ bouncing issue, Gary Anderson looks at how and why some teams struggle with it more than others, using Ferrari, Red Bull and Mercedes as case studies
The Race started in February 2020 as a digital-only motorsport channel. Our aim is to create the best motorsport coverage that appeals to die-hard fans as well as those who are new to the sport.

BMW may enter F1 to compete with German rivals – GPblog

Posted on July 16, 2022
Close enenGPblog.com BMW could be making a return to Formula 1 in the next few years. The German marque may be entering into a...
Read More

Posted on June 13, 2022
Tight on the grid, tighter in the standings.Just 15 points separates the top three drivers in the 2022 F1 drivers championship, with Red Bull...
Read More

F1 qualifying race time: What time qualifying starts on Saturday for US Grand Prix, how long it lasts – DraftKings Nation

Posted on August 31, 2022
Filed under:F1 is back for the United States Grand Prix in Austin, Texas. Qualifying is scheduled for Saturday and we run through some key...
Read More