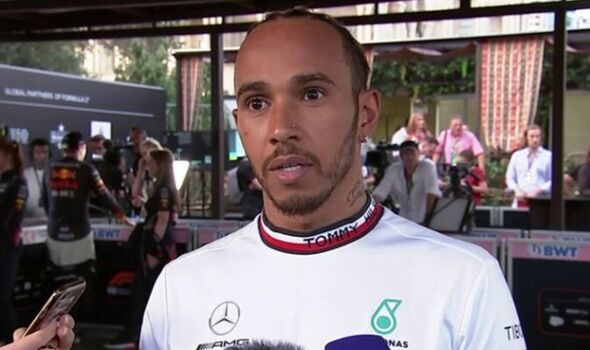 We use your sign-up to provide content in ways you’ve consented to and to improve our understanding of you. This may include adverts from us and 3rd parties based on our understanding. You can unsubscribe at any time. More info
Lewis Hamilton insisted he wasn’t concerned about being investigated by the stewards at the Azerbaijan Grand Prix for driving unnecessarily slowly – and was then cleared of any wrongdoing. Mercedes‘ Hamilton slowed down in front of McLaren’s Lando Norris, whose team-mate Daniel Ricciardo was just behind, and was looked into for going too slowly against target time.
Norris was told on the radio at the end of Q2: “Don’t let him play silly b*****s. He’s got to keep an eye on his delta, if he doesn’t he’ll be in trouble. He’s the lead car, he’ll get in trouble.”
When told he needed to speed up, Hamilton told the Mercedes pitwall: “I don’t know what you expect me from sometimes.” The FIA then confirmed the Briton would be investigated once qualifying was over.
But the seven-time world champion, who finished P7 in qualifying and will start Sunday’s race there having not been penalised, told Sky Sports F1 after the session: “I don’t really have a concern. Firstly I was off-line and you have to be within a delta time and I was within my delta time.
QUALIFYING RESULTS IN FULL: Leclerc on pole ahead of Perez and Verstappen

“I wasn’t below that out-lap pace so within the delta time so I should be able to drive at the speed I want. And I was off line, so I wasn’t holding everyone up. I was trying to get a tow because we’re so slow in the straight lines. The guys behind didn’t want to go by so I just went off and did my lap.”
Team principal Toto Wolff said: “I cannot preempt what the stewards are going to say. I think he was within the delta time. What that means, how the stewards are going to assess it, I don’t know.”
Hamilton added of Mercedes’ lack of pace: “I’m not surprised [we were over a second off pole]. It was the same in Monaco. It’s the same.” Yet he added: “There’s lots to look forward. It’s a tricky and chaotic race, there’s lots that can happen. We’re in the top 10.
“It was a really difficult qualifying session because we’re constantly pushing, we have a very, very small window with the car. Everything we try doesn’t give us what we want. We’re making lots of changes but we always come out with the same conclusion which is most often bouncing, which loses us a lot of performance.
“And then all the performance is when you get the car low. We just say, ‘We’ll take a beating with our backs and necks and get the car as low as possible to get performance.’ I went lower and it’s bouncing a little bit more than the other car.
“But we’re still there, we’re just very slow on the straights. It might be a struggle tomorrow in the race but we’re going to give it everything and I hope maybe we’ll have better race pace, who knows.”
Charles Leclerc secured pole position in Baku and will front the grid for the fourth successive race. The Monaco driver has not won any of the last three races however. Sergio Perez and Max Verstappen start second and third in the Red Bulls with the other Ferrari of Carlos Sainz fourth.
See today’s front and back pages, download the newspaper, order back issues and use the historic Daily Express newspaper archive.

DRIVER MARKET: Who will get the nod to partner Magnussen at Haas next season? – Formula 1

Posted on July 10, 2022
Welcome to GPFansAre you a F1 Fan? Follow GP FansEditionRed Bull team principal Christian Horner has called upon F1 and the FIA to look...
Read More

Posted on November 8, 2022
We use your sign-up to provide content in ways you’ve consented to and to improve our understanding of you. This may include adverts from...
Read More

Posted on August 18, 2022
You are logged in. Benefit directly from all the benefits of your account:Become part of the largest racing community in the United Kingdom. Create...
Read More