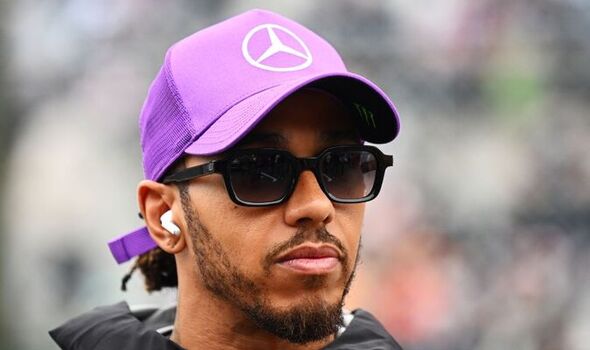 We use your sign-up to provide content in ways you’ve consented to and to improve our understanding of you. This may include adverts from us and 3rd parties based on our understanding. You can unsubscribe at any time. More info
For all his success, there is still one element of Lewis Hamilton’s Formula One career that is tinged with regret – his failure to copyright his steering wheel design which has since been copied by fellow rivals on the grid. The seven-time world champion has opened up on his creative brain and his ability to think outside the box when it comes to the ergonomics of his car.
Although it’s been a campaign to forget for Hamilton, who is currently sixth in the 2022 driver standings, he remains one of the most influential figures within the sport as he seeks to enhance his legacy on the track.
Yet away from it, he has already left a lasting impression on the grid with his steering wheel design, which has proved to be a game-changer not only with Mercedes but with rival teams too, including Red Bull.
“What a lot of people don’t actually know is that I re-designed the steering wheel when I was at McLaren,” Hamilton revealed to CNA Luxury during a sit-down hosted by TeamViewer.
“And when I came to Mercedes, I did the same thing, and the other teams have all copied the wheel. All the old wheels used to be circular. Now, you’ll see there’s a top and the handle comes down and it doesn’t join at the bottom.

“I should have copyrighted it. This is something I’m really proud of – I really love working on the ergonomics of the car.
“I also designed the seat for my cockpit; I filed it down and it’s been pretty much the same seat for [almost] 10 years with the team. We also redesigned the pedals with the engineers.
“Those are the things I love to do, as it allows me to tap into a bit of creativity.”
There are up to 17 buttons on an F1 car steering wheel, which includes: DRS, gearbox neutral, pit lane speed, brake balance, engine speed, radio, LEDS, shift paddles and more.
Despite Hamilton’s slick design, Mercedes’ W13 has failed to prove capable of matching last season’s achievements after suffering with a series of issues including extreme porpoising in the first races of the season.
The 37-year-old is currently on course for his first winless season having failed to secure top spot in each of his last 19 races.
Hamilton’s future with Mercedes has resultantly been plunged into doubt and the driver himself has even admitted he’s still trying to determine the next step in his career.
“I’ve spoken to a lot of amazing athletes over time that have been in competition towards the end of their careers, and also ones who are retired. Many said that they stopped too early or too late,” Hamilton said, despite recently declaring he could yet stick around for another five years.
“Most said you will know when the time is right [to retire]. But because we’re so single-minded [as race car drivers] and so focused on being the best we can be, we usually lack the time to do other things.
“So when an athlete does retire, it’s like the whole world comes to a stop. So I’m trying to put these things in place so that it’s a very easy transition for me afterwards.”
In the Constructors’ Championship, Mercedes are currently in third position behind Red Bull and Ferrari on 387 points.
Next up for Hamilton and co is the United States Grand Prix, which returns this coming Sunday (October 23) at the Circuit of Americas in Austin, Texas.
See today’s front and back pages, download the newspaper, order back issues and use the historic Daily Express newspaper archive.

These teams underwent the most upgrades, but did they work? - GPblog