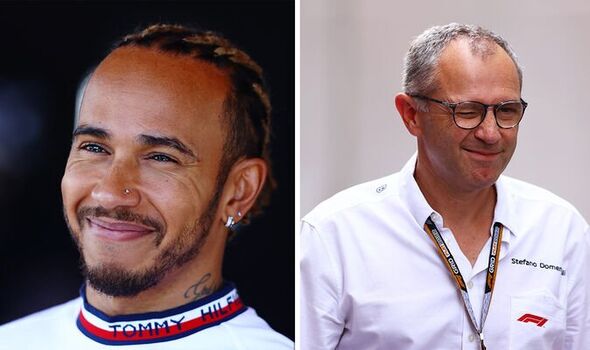 We use your sign-up to provide content in ways you’ve consented to and to improve our understanding of you. This may include adverts from us and 3rd parties based on our understanding. You can unsubscribe at any time. More info
F1 are on the verge of signing a deal to host a race in South Africa for the first time in almost 30 years in good news for Lewis Hamilton. Reports suggest F1 CEO Stefano Domenicali will head to the country next week to try and finalise a deal with talks believed to be at an advanced stage.
The Daily Mail claim the race is set to take place at the Kyalami circuit, which last hosted an F1 race back in 1993. However, the track is currently used for GT racing but has hosted single-seater races for A1GP in 2009 and the GP Masters for retired F1 stars in 2005.
The venue is believed to be able to hold 100,000 spectators and will only need minor upgrades to meet F1 standards. It means F1 will have reached every habitable continent on the planet for the first time in the sport’s 72-year history.
F1’s first race in the Middle East was not established until 2004, over a decade after Kyalaimi was removed from the calendar.
READ MORE: Max Verstappen joins Lewis Hamilton in push to make F1 bosses end wait

The news is expected to please Lewis Hamilton who has previously called for the race to be added to the calendar on numerous occasions. He said back in April: “’The place that I really feel is dear to my heart and most important to get a race back is in South Africa.
“There is a great following out there and I think it would be great to be able to highlight just how beautiful the motherland is.” Hamilton’s idol Ayrton Senna was involved in a titanic battle at the last race in 1993 which was eventually won by Alain Prost.
Back in 2018, Adrian Scholt, CEO of Motorsport South Africa, claimed there had been a number of plans to bring the race back to the country but these had never come to fruition. However, he admitted staging a race would require a lot of money and require political support.
DON’T MISS
F1 set for 2023 calendar shake-up as teams unite behind Domenicali [INSIGHT]
F1 bosses and Monaco in talks as Grand Prix at risk of being axed [ANALYSIS]
F1 boss made ‘secret visit to Sydney’ to hear Australian GP pitch [COMMENT]

Domenicali has recently said there was ‘potential’ F1 could return to Africa as there was a ‘lot of interest’ in the sport. He stressed some of F1’s existing Grands Prix will not remain on the calendar to make room for new races.
Of races on this season’s calendar, France, Belgian, Mexico and Monaco do not yet have deals past the end of 2022.
Domenicali said: “On top of America, on top of China, there is a potential to be in Africa soon. There is a lot of interest there. That’s an area that so far is missing in the geography of our calendar. It is up to us to try to find the right balance between the historical values of the old and famous European tracks and other destinations across the world.
“Various promoters have expiring agreements, and some of the current grands prix will probably no longer be part of the calendar.”
See today’s front and back pages, download the newspaper, order back issues and use the historic Daily Express newspaper archive.

Nikita Mazepin has 'confidence' F1 return will be possible - PlanetF1

The Pit Stop: Five F1 Stories You Might've Missed This Week – The Sportsman

Posted on August 7, 2022
The Formula One ‘silly season’ is here, with the off-track intensity that disappears for the next 18 days being replaced by intense contract talks and...
Read More

Posted on July 5, 2022
AdvertisementSupported byThe son of Mario Andretti has had much racing success, but breaking into Formula 1 poses a major challenge.Send any friend a storyAs...
Read More

Posted on October 11, 2022
You are logged in. Benefit directly from all the benefits of your account:Become part of the largest racing community in the United Kingdom. Create...
Read More