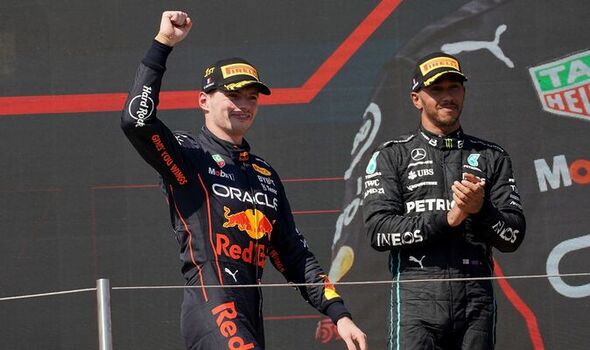 We use your sign-up to provide content in ways you’ve consented to and to improve our understanding of you. This may include adverts from us and 3rd parties based on our understanding. You can unsubscribe at any time. More info
Lewis Hamilton has been told of the “terrifying thing” potentially stopping him from ever winning another F1 world title. The British racing superstar has endured a frustrating 2022 campaign with Mercedes falling behind both Ferrari and Red Bull in developments of their car.
It looked set to be a straight fight between Red Bull and Ferrari in the early races, but the former soon established their dominance. More so Verstappen, who proved his skills once again to continue beating team-mate Sergio Perez on a regular basis.
Now a two-time F1 champion, Verstappen is beginning to etch his name into the history books. Hamilton will want a car capable of challenging at the front next year to stop Verstappen winning in three consecutive years.
But former F1 driver Johnny Herbert has compared Verstappen to Michael Schumacher, insisting the Dutchman is only going to keep improving. “He (Verstappen) has built that whole team around him,” Herbert told Sky Sports.

“They think and believe he is the best ever. I remember Michael Schumacher , it’s the exact same situation.
“And he just gets stronger and stronger. That’s the terrifying thing for anyone who wants to try and beat him.” Most teams are already long into their development of next year’s car and more pressure will be on Mercedes to close the gap.

But there will also be plenty to race for in the final few Grands Prix of the 2022 campaign. The Silver Arrows have already secured at least a third-place finish in the Constructors’ Championship.
Ferrari are 67 points ahead in second with four races remaining, giving them an outside chance of stealing second in the championship. There will likely be even more onus on the drivers to keep performing with the head-to-head record between George Russell and Hamilton still mighty close.
Russell holds a slight advantage on Sunday, beating Hamilton 10 times compared to the eight occasions the 37-year-old has finished ahead of his team-mate. But Hamilton has reigned supreme in qualifying, finishing quicker of the two in 11 of the 18 races.
See today’s front and back pages, download the newspaper, order back issues and use the historic Daily Express newspaper archive.

BEYOND THE GRID: US racing legend Bobby Rahal on living the American F1 dream – Formula 1

Posted on October 19, 2022
VIETNAM planned to host their very first Grand Prix back in 2020.The £540million Hanoi motor race circuit was set to welcome the paddock as...
Read More

Posted on October 23, 2022
You have reached ESPN’s UK edition. Stay on current site or go to US version.Formula One will continue to be broadcast in the U.S....
Read More

Posted on August 26, 2022
Andretti has made clear his frustration at the apparent slow progress regarding his attempt to join the series with a brand new team, having...
Read More