Porsche’s soon-to-be-confirmed re-entry will mark the fourth Formula 1 campaign for the German sportscar manufacturer and serial Le Mans 24 Hours victor.
But the nature of each of those campaigns – from the original works team of the early 1960s to supplying McLaren 1983-87 under the guise of TAG badging to its ill-fated supply of an overweight V12 to Arrows in 1991 – have been very different.
The motivations and justifications have been different each time – and this time it’s different again.

At the heart of the company’s return to F1 in 2026 as a 50% shareholder in Red Bull Technology has been F1’s very deliberate and targeted attempts at attracting more automotive participation in the category.
It’s no coincidence that the new-for-2026 power unit regulations and associated financial regulations released this week were much as the VW Group (which owns Porsche) was pushing for. F1 has gone out of its way to accommodate and align.
Those pre-conditions for Porsche which have been met by the 2026 regs include:
* The abandoned MGU-H which was such a tricky technology to master, Honda’s initial humiliation probably scaring manufacturers away.
* The increased electrification (from massively more powerful MGU-K and battery) to align with the automotive marketing push.
* More standardisation of mechanical parts but freedom to develop the electric part.
* Renewable fuels.
* A power unit cost cap, but with concessions for a new manufacturer on cost and dyno time.
But the clincher has surely been the availability of a plug-in highly competitive team with its own F1 power unit manufacturing facility. 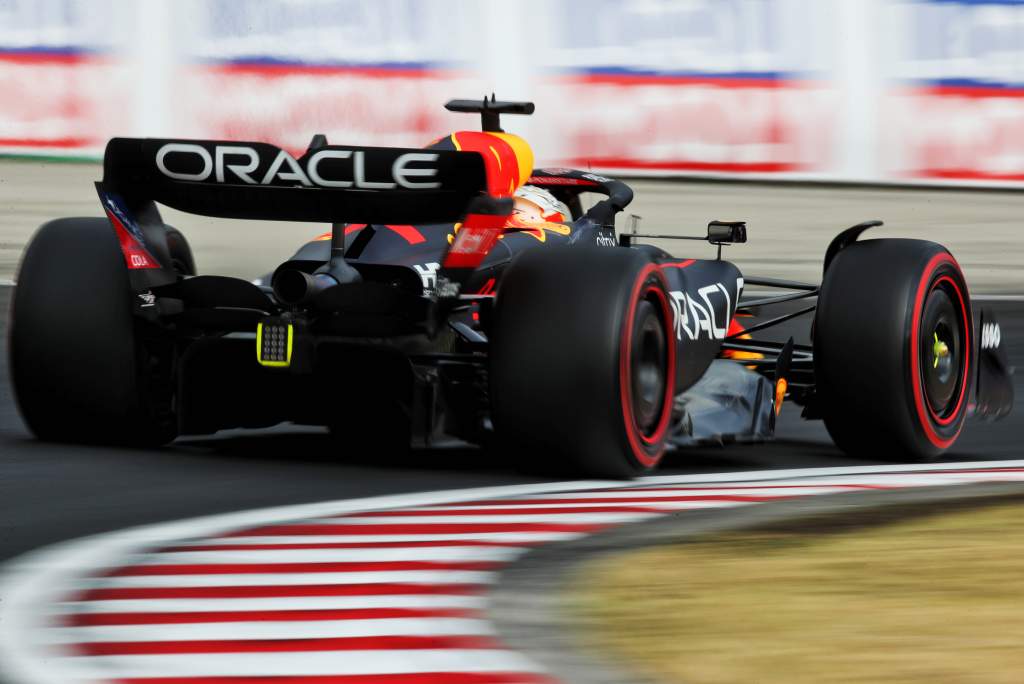 Crazy as it sounds for a company of Porsche’s sporting heritage and engineering reputation, it was simply not equipped to ready its own power unit from scratch in time for 2026. Red Bull Technology is.
So, with the overall cost cap limited (including now a specific power unit cap) and F1’s income so healthy, for the first time in the championship’s history, every team is a profitable entity. The successful ones especially so.
The super-strong logic of Porsche buying into an existing team for its new F1 programme becomes almost irresistible when that team is of the calibre of Red Bull.
Whether the power unit development concessions are balanced, too restrictive or attractively lenient becomes almost a second-order consideration.
Regardless, Porsche can enhance the power of its brand by participating in F1 – and it will likely make money while doing so. It’s almost as if the conditions for entry were tailor-made for Porsche…
F1 has always adapted to the world in which it exists and making it attractive to participants is at the core of its success. This may have been an organic process in the championship’s early days but, since its commercial electrification in the late 1960s/70s, that evolution has been steadily more targeted.
Porsche’s varied F1 programmes over the decades nicely illustrate the business development of the series. 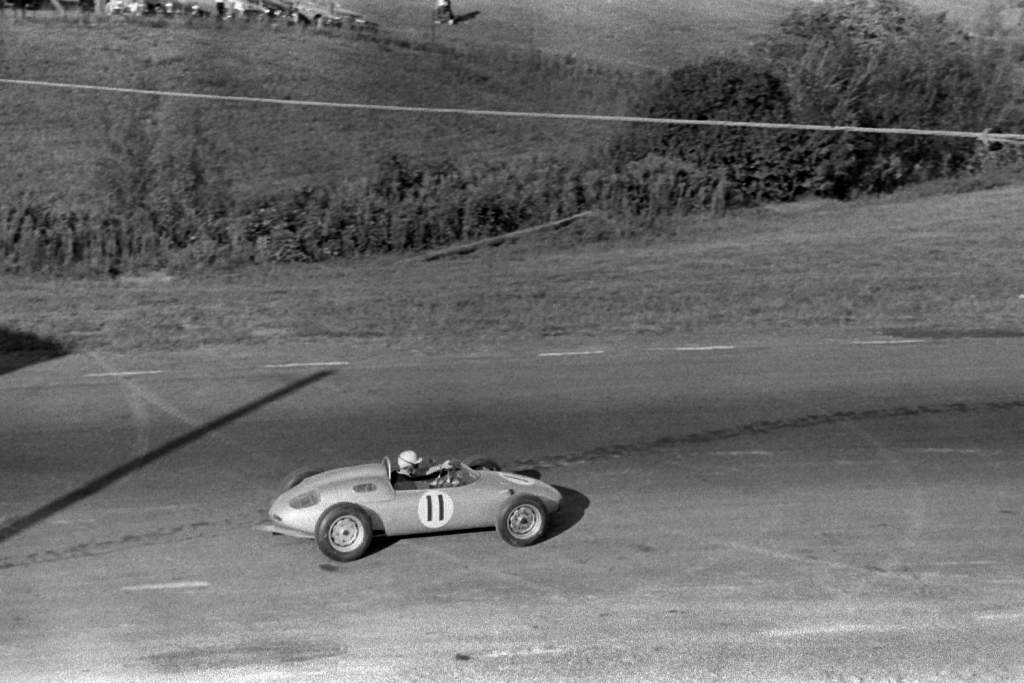 The FIA’s new 1.5-litre formula for 1961 meant that Porsche’s F2 car – which had been developed from its sportscar racer in the late 1950s – was eligible for F1. This was almost an incidental development.
Porsche was just a specialist sportscar manufacturer at the time and nothing like the behemoth it became in the late 1960s and 70s. It entered competition as a way of learning and developing. In F1’s efforts at reducing performance – for reasons of safety – it happened to dovetail with a programme Porsche was already embarked upon.
So it arrived in F1 in 1961 almost by default, but did so as a full works factory entry. It also quickly became apparent that the four-cylinder former F2 car was not fully competitive with the state-of-the-art F1 cars from the specialist F1 manufacturers of the time (though Dan Gurney did manage to score three second-place finishes with it).
A more powerful eight-cylinder car, the 804, was developed for 1962 and Gurney triumphed with it in that year’s French Grand Prix, to date the only Porsche engine/Porsche chassis F1 championship-status grand prix victory.
But the car still lagged behind the best and at the end of the season Porsche announced it was pulling out, having spent half-a-million pounds on the project and feeling that this did not represent good value for money. British teams using bought-in engines were operating far more economically and had a more advanced understanding of chassis technology. Porsche went on to become a legend in endurance sportscar racing. 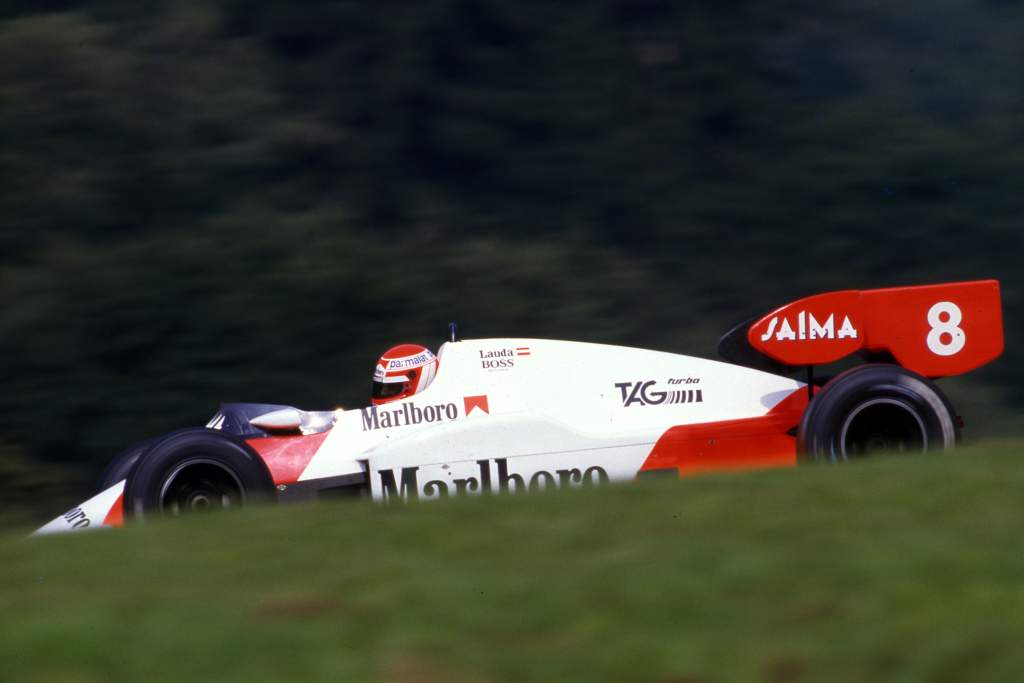 Porsche was not tempted to re-enter F1 as a works entity. Unprecedented success at Le Mans over decades was arguably a far better fit with its aims – both marketing and technical – than F1 participation in the 1960s and 70s could ever have been.
But in 1983 McLaren – looking to transition from the DFV to the turbo era – came calling, with a TAG chequebook in hand.

McLaren’s technical director John Barnard had identified Porsche – with many years of turbo racing experience – as the ideal paid engineering consultant to create his ultimate F1 turbo engine.
He specified its general dimensions, with an eye to ultimate aerodynamic performance from the car, and Porsche created for the team the TAG V6.
It was a fabulous engine for the time and was a big part of McLaren’s domination of the 1984 and ’85 seasons (as well as Alain Prost’s against-the-odds winning of the ’86 title).
But there was no big manufacturer development budget and ultimately it was out-gunned in this regard by Honda, which took over as the dominant F1 engine from 1987, the last year of the TAG-Porsche motor in F1.
Porsche had impressively demonstrated it could master F1 engine technology – even though it had been paid to do so by a third party. But even that was not enough to tempt it back in an official capacity.
F1 was still dominated by specialist teams with intricate specialist knowledge of the quickly advancing science of single-seater aerodynamics. 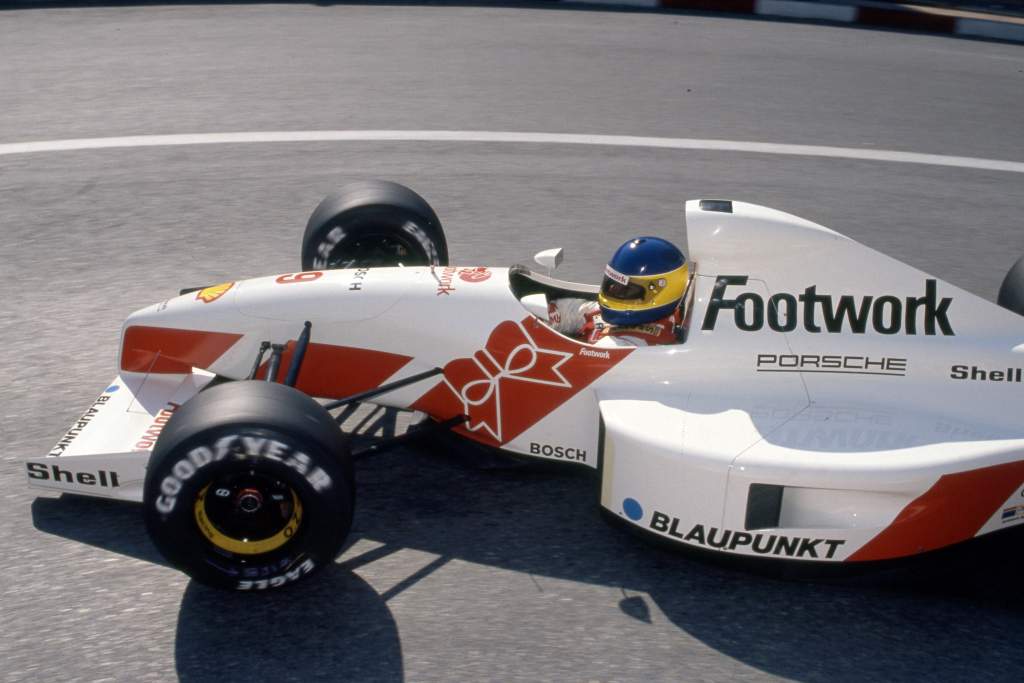 Hans Mezger, legendary Porsche engine designer, who had created the superb TAG-Porsche V6, felt that the new naturally-aspirated 3.5-litre formula would lend itself to an adaptation of that basic 1.5-litre V6 – but paired up into a big normally-aspirated V12.
Footwork Arrows boss Jackie Oliver, always on the look-out for a financially attractive shortcut as he battled to keep his team in business, negotiated with Porsche to be the recipient of this pet programme of Mezger’s.
It was a disaster, at around 50kg overweight and over 100bhp down on power. The partnership was over by mid-season. And with its fingers thus burned, Porsche would stay out of F1 for decades.

The championship was still in its entrepreneurial phase, with the Bernie Ecclestone-orchestrated band of independents at its core.
Ecclestone – and his cohort Max Mosley – had only a few years earlier successfully fought-off what initially looked like an automotive takeover of F1, through the turbo era. Manufacturers were welcome to come and spend money, but there was no big motivation or desire to make F1 particularly welcoming for them.
Porsche’s half-hearted 1990s programme was essentially just indulging its highly respected engineer in his side project. But such was F1’s profile, failure was very public. 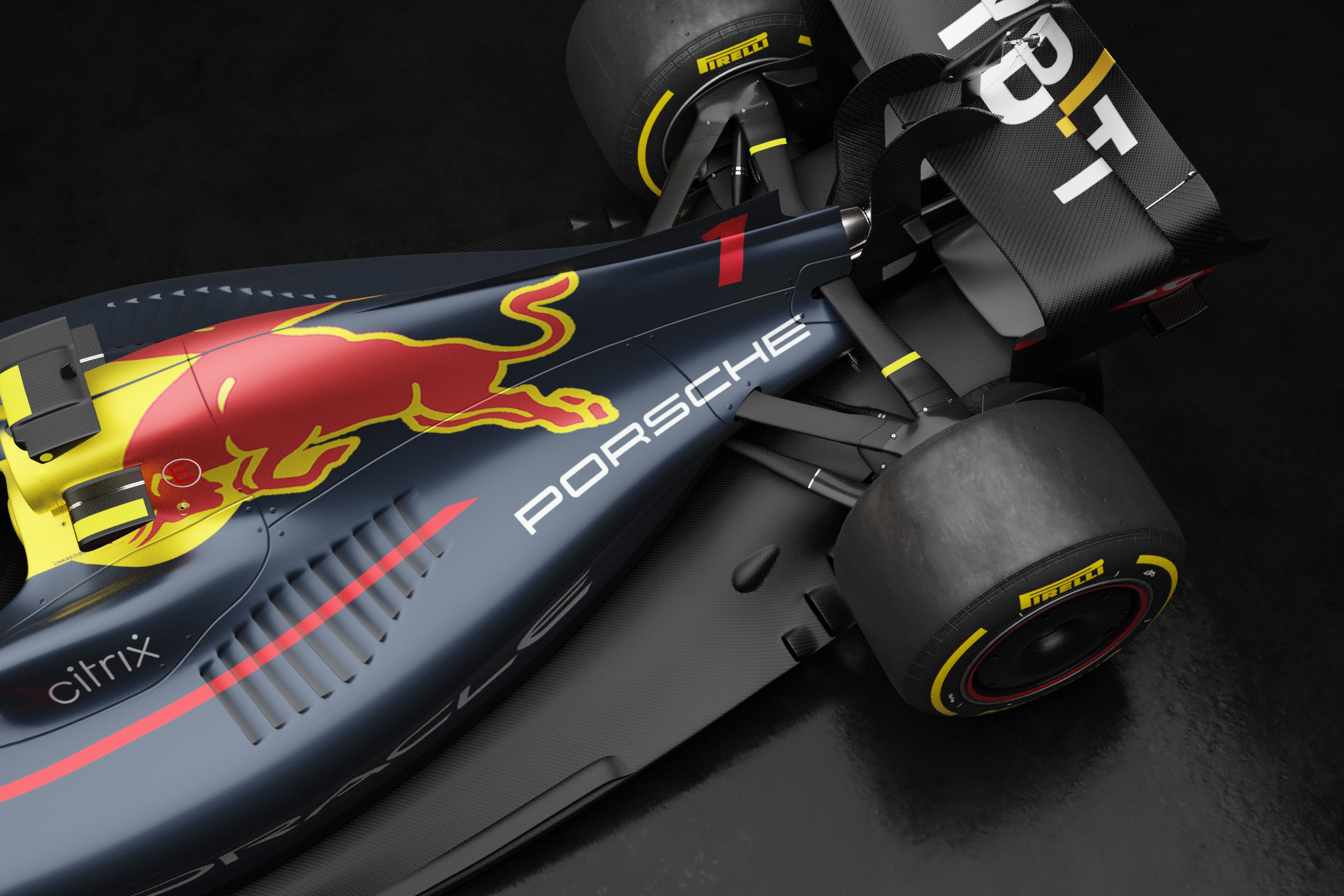 This entry is way more focused and considered than any of Porsche’s previous F1 projects and is built around the VW Group’s negotiations with F1 itself.
It’s difficult not to foresee it as a highly-successful major player in the future.
[3D model by Chris Paul Design/Unkredible Studios]
Toto Wolff fears the Oscar Piastri case has set a precedent that “if you’re clever you can manoeuvre yourself out” of an F1 junior programme
After a practice problem compromised their Dutch GP weekend more than was immedately obvious, Red Bull and Max Verstappen had to dig deep
Charles Leclerc missed out on pole position for the Dutch Grand Prix by a tiny margin – which made a time-sapping moment in the middle sector an obvious source of frustration after qualifying
Max Verstappen will start his home Formula 1 race from pole position after snatching top spot from Charles Leclerc on his final lap in Dutch Grand Prix qualifying before Red Bull team-mate Sergio Perez spun at the final corner
The new ground effect aero rules for 2022 have forced teams to put together a new family of wings. Racing at Spa and Zandvoort on consecutive weekends offers us a good example of the differing levels, as Gary Anderson explains
McLaren team principal Andreas Seidl believes the FIA superlicence points regulations should be changed to allow competitive IndyCar drivers to move directly to Formula 1
The Race started in February 2020 as a digital-only motorsport channel. Our aim is to create the best motorsport coverage that appeals to die-hard fans as well as those who are new to the sport.

Posted on September 5, 2022
At this point we shouldn’t be surprised by the sheer dominance that Felipe Drugovich is showing in Formula 2. In an eventful day alongside...
Read More

Posted on October 1, 2022
Welcome to GPFansAre you a F1 Fan? Follow GP FansEditionFormer F1 champion Emerson Fittipaldi believes the sport should look to add up to three...
Read More

Posted on October 8, 2022
We use your sign-up to provide content in ways you’ve consented to and to improve our understanding of you. This may include adverts from...
Read More

Posted on November 2, 2022
The Belgian GP ‘s future is still unclear.The Belgian GP is one of the most beloved races on the F1 calendar, with the iconic...
Read More