We use your sign-up to provide content in ways you’ve consented to and to improve our understanding of you. This may include adverts from us and 3rd parties based on our understanding. You can unsubscribe at any time. More info
Keanu Reeves and Sky Sports F1 pundit Martin Brundle suggested that they swap jobs as the Matrix star was a surprise guest at the British Grand Prix qualifying session. Reeves was in attendance as he prepares to shoot a documentary series based on the F1 2009 season, and after he revealed that he is the host of the show to Brundle, the pundit said: “Hopefully I will get to talk to you,” to which Brundle responded by telling Reeves that “we will swap roles then!”
“It was wet but it was thrilling,” Reeves told Brundle as he took in the action at Silverstone. “It was absolutely amazing to be that close. Silverstone and rain, perfect. I think being that close to it, just seeing the speed and the way that they’re going at the turns and exiting the turns is something unbelievable.
“We are being hosted by Ross Brawn, he has been a legend and is such an amazing person so it was really cool to meet him and spend some time with him, he offered us the chance to be here. That’s what we are going to try and do [documentary on Brawn 2009 season] we are going to tell that amazing, remarkable story.
“There is so much to talk about, I mean you [Brundle] were there!” Brundle responded: “Yeah we commentated all the way through that remarkable season.”
READ MORE: Hamilton ‘unlucky’ in Russell duel as veteran backed to hit top form 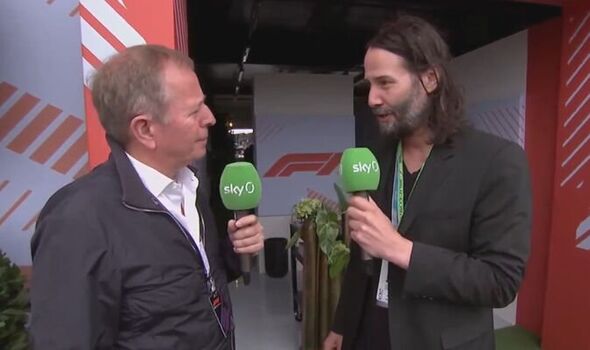 Reeves’ F1 show revolves around the exit of Honda from F1 in 2008 and the rise of Brawn in 2009. It will feature interviews with Ross Brawn, Jenson Button, Rubens Barrichello, and other important figures from the era.
“From the outside a friend of mine was telling this story and I was so struck by it,” the John Wick star added. “We were like ‘Well lets tell that story’ and it has been really great to be able to learn more from what was going on in F1 back in the day, there was just so much happening in F1. Just the world of F1 was extraordinary, it always is but that year with Brawn I think something special happened.
DON’T MISS
Lewis Hamilton and George Russell set for ‘big ticket’ upgrades [INSIGHT]
Button and Brundle disagree on Hamilton, Russell and Norris [ANALYSIS]
Lando Norris takes jab at Mercedes’ George Russell before British GP [COMMENT] 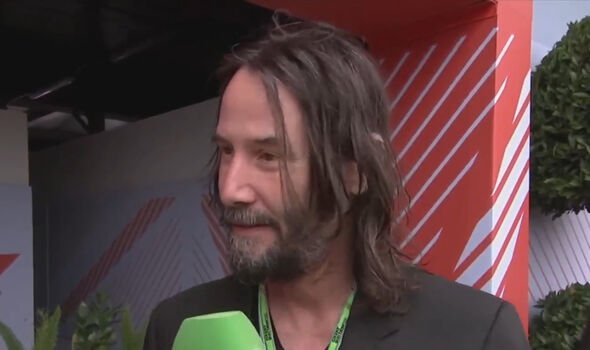 The filming of Reeves’ Disney+ show is already underway. The actor recently filmed an interview with the former chairman of Ferrari, Luca di Montezemolo, and is set to debut in 2023.
Reeves was in attendance to see Red Bull’s Max Verstappen spin as he struggled to deal with the rain-affected surface at Silverstone. The Dutchman lost control of his car at Stowe corner, but still finished P2 behind Carlos Sainz.
He was also booed by the home crowd during his post-race interview. “It was quite a tricky qualifying with the rain,” he explained to Channel 4. “Also, because it was raining and then dry you had to find pace at the right time, but the car was working well.  Q3 can be a bit of a lottery sometimes. But still, to be on the front row is very good for us and we have a good race car in the dry and the wet. Success tomorrow is not just about the first lap but the whole race, tyre management and things like that.”
See today’s front and back pages, download the newspaper, order back issues and use the historic Daily Express newspaper archive.

Posted on September 17, 2022
You are logged in. Benefit directly from all the benefits of your account:Become part of the largest racing community in the United Kingdom. Create...
Read More

Posted on November 8, 2022
For its planned 2023 Formula 1 driver line-up, Williams is gambling on someone who barely 12 months ago was facing a much less certain...
Read More

Posted on August 1, 2022
The German car manufacturer introduced a series of changes for last weekend’s Silverstone race aimed at building on the progress it made with a first...
Read More