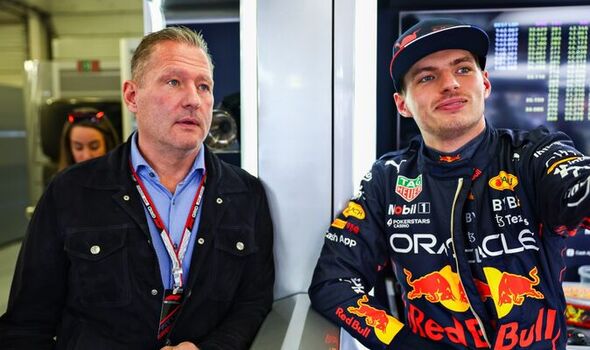 We use your sign-up to provide content in ways you’ve consented to and to improve our understanding of you. This may include adverts from us and 3rd parties based on our understanding. You can unsubscribe at any time. More info
Max Verstappen’s dad believes Daniel Ricciardo had the biggest influence on his son’s career out of all the other team-mates he has had in F1. Verstappen first burst onto the scene in the sport as an extremely highly-rated 17-year-old way back in 2015 and is now established as one of the greatest modern F1 drivers in history.
He was crowned F1 world champion for the second consecutive year last week at the Singapore Grand Prix. Sergio Perez played his part as his move on Charles Leclerc at the final corner ultimately led the Ferrari driver to make a mistake, which saw him drop down to third after a time penalty.
The Mexican driver has still been unable to match Verstappen’s achievements by some margin this year, but he’s far from being alone in that sense. Pierre Gasly and Alex Albon have also struggled to keep pace with the Dutchman at Red Bull while Verstappen also outperformed Carlos Sainz in his first season in F1 with Toro Rosso.
Ricciardo remains the only driver to beat Verstappen as a team-mate during an entire season back in 2017. The pair spent three years competing with each other at Red Bull and tempers often flared on track between them both.

But there’s clearly a mutual respect from the Verstappen camp at least with Jos Verstappen naming Ricciardo as the most influential team-mate of his son’s career. When asked by Formule1.nl who he believes has been his son’s best team-mate, Verstappen Sr said: “I find it very difficult to say.
“I think he might have learned the most from Daniel Ricciardo, a nice peer he gets along very well. Max was still a young boy at the time and Ricciardo was really good, a qualifying animal.”

Ever since leaving Red Bull, Ricciardo has struggled to settle at a team and now looks set for a spell off the track heading into next year with Oscar Piastri replacing him at McLaren. Where Verstappen appears to be at one with his Red Bull car, the Dutchman’s father believes Ricciardo has simply not had that at either Renault or McLaren.
“I also think the car suited him well then and that’s a bit of Ricciardo’s problem now,” he added. “The car is not so good for him. There are things that don’t suit Ricciardo so well and that’s why it doesn’t work out.
“The young guard adapt more easily. You know: you shouldn’t move an old tree. You have a certain style with older drivers – and that goes for me too – that has grown that way. And that is difficult to change. Such a young person adapts more easily.”
See today’s front and back pages, download the newspaper, order back issues and use the historic Daily Express newspaper archive.

POINTS PERMUTATIONS: How Red Bull can seal their first constructors’ title since 2013 at the United States GP - Formula 1

'Why would you risk it?' – Sainz explains his reluctance to drive historic F1 cars – Formula 1

Posted on June 18, 2022
Please refresh the page or navigate to another page on the site to be automatically logged inPlease refresh your browser to be logged inFollow...
Read More

Posted on August 28, 2022
When quarantine hit and I found myself itching to watch race cars again, I made a decision: I bought a subscription F1 TV, the...
Read More