Mercedes is planning to race with a new front wing on its 2022 Formula 1 car at the Mexico Grand Prix – a wing which raised eyebrows when first revealed in Austin last weekend.
The team publicly displayed a new wing for the W13 at the United States GP as part of a wider upgrade package but didn’t run the wing detail all weekend. 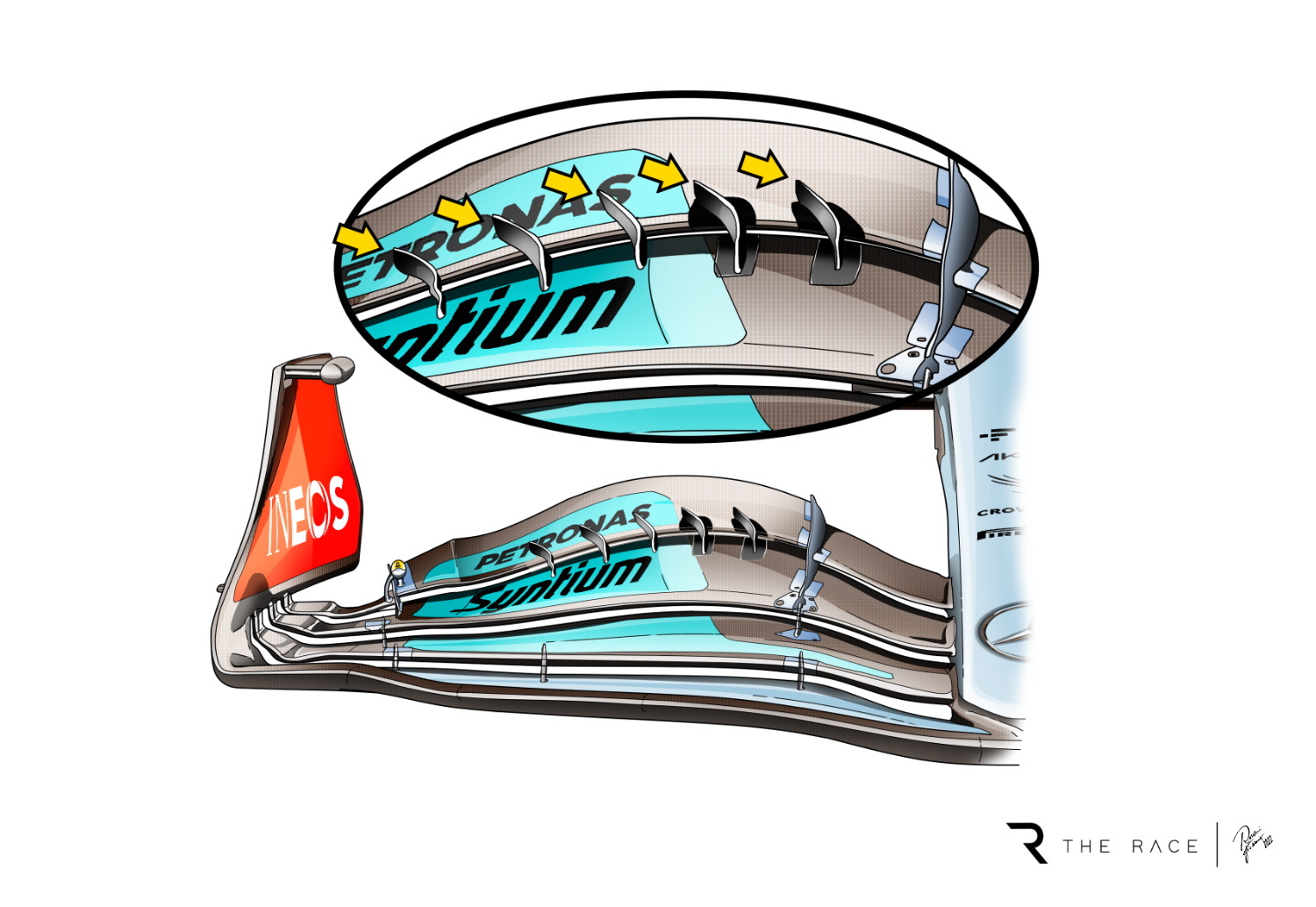 This followed question marks being raised over the legality of the specially shaped fasteners between the two upper flaps that led to an “exchange” with the FIA.
But Mercedes Formula 1 technical director Mike Elliott said it was always the plan to not run the wing as the team didn’t have enough copies of it for both drivers to run the update.
Elliott said he was unsure whether Mercedes would run the new front wing detail during the three remaining races in 2022 because of the risk of it being found illegal when it only provides a marginal performance improvement.
“Personally, I think we could argue them,” Elliott said in Austin. “But the question becomes whether we want to or not.
“The gain for those bits is so small, is it worth the risk of falling foul of the stewards?”
The legality question marks centre around what the primary purpose of the design is.

Mercedes says the fasteners on the wing are there to keep it together while the counterargument is that their distribution is deliberate for aerodynamic gain.
“The reason we didn’t run it in Austin was that we only had one of those parts,” trackside engineering director Andrew Shovlin said in the team’s regular race debrief YouTube video.
“So, if we damaged it during qualifying it would have meant the car that damaged the wing had to start from the back.
“Also with a very busy programme, we had the tyre test in FP2, we didn’t actually have time to evaluate.
“We have more of those parts available in Mexico, we will run that on the Friday, we’ll check it’s all working as expected, and the plan at this stage is to race that wing.”
Shovlin confirmed that while Austin’s upgrade marked the final major development of the season, the team will still make changes to the W13 during the final three races.
“That is our last major update but there are always a string of new parts, smaller parts, that we are looking at,” Shovlin added.
“Either to get a small gain in performance, [or] at a lot of it as this stage of the year though is learning for next year, so some of those test parts are really just trying to understand some of the development direction we want to go in.
“So like I said, it’s the last major update, but it won’t be the last change to the car.”
As well as attempting to gather data for when it – according to team boss Toto Wolff – changes the “DNA” of its car next year, Mercedes is also trying to save itself from its first win-less F1 season since 2011.
Yuki Tsunoda labelled Daniel Ricciardo’s overtaking attempt at the Mexican Grand Prix “pretty impossible” after their contact led to Tsunoda’s retirement
Max Verstappen and Red Bull boycotted interviews with Formula 1 broadcaster Sky Sports over the Mexican Grand Prix weekend as the world champion believes Sky has been “disrespectful” throughout his second title-winning season in 2022
Could Mercedes have stopped Verstappen from getting a 14th Formula 1 victory of 2022 at the Mexican Grand Prix or was defeat inevitable? Our writers give their verdict
Max Verstappen took his 14th victory of 2022 in the Mexican Grand Prix, breaking Formula 1’s record for most wins in a season as the hoped-for Mercedes challenge failed to materialise
A Ferrari-beating performance from Valtteri Bottas in qualifying in Mexico owed a little to underperformance elsewhere, but he and Alfa Romeo did such a good job that Bottas surprised himself
Daniel Ricciardo has suggested Formula 1 could introduce paddock “guidelines” after drivers raised concerns at the Mexico City Grand Prix about some fans getting carried away with their behaviour
The Race started in February 2020 as a digital-only motorsport channel. Our aim is to create the best motorsport coverage that appeals to die-hard fans as well as those who are new to the sport.

The hidden F1 upgrade Red Bull snuck under the radar at the British GP – Motorsport.com

Posted on July 4, 2022
However, something that’s slipped under the radar but has now been spotted is an intriguing change the team has made to the RB18’s floor.The new...
Read More

Posted on November 13, 2022
America's FavoritesTrending in U.S.A.With both the drivers’ and the constructors’ championships done and dusted, one would have expected the Brazilian GP to be a...
Read More

Hamilton: Red Bull did an incredible job, every single individual there – Grand Prix 247

Posted on October 19, 2022
Hamilton has made it clear that he intends to be part of that future for a long time to come, but the task at...
Read More