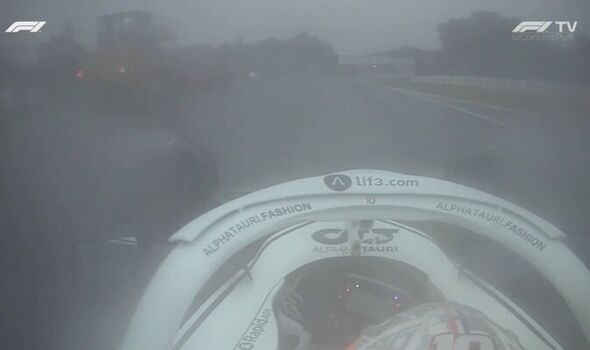 We use your sign-up to provide content in ways you’ve consented to and to improve our understanding of you. This may include adverts from us and 3rd parties based on our understanding. You can unsubscribe at any time. More info
Pierre Gasly fumed after almost crashing with a tractor during the opening lap of the Japanese Grand Prix. Scary on-board camera footage showed just how little the AlphaTauri driver could see during the start of the race as a piece of debris got stuck to the front of his car, despite not leaving the track.
That, combined with the poor visibility from the spray, left the Frenchman with very little vision. A number of drivers crashed out on the first few corners and one of the removal vehicles made its way onto the track.
But under the yellow flag Gasly almost collided with the huge yellow tractor. On-board footage shows how Gasly drives past the yellow tractor which has two red lights that are just about visible.
“God! What the?! What is this tractor?! What is this tractor on track? I passed next to it, This is unacceptable! What has happened? Can’t believe this,” Gasly fumed over his team radio.
The race was red-flagged on lap three and when Gasly got out of his car and he was caught on camera having a heated discussion with a member of his team in the garage.

Alex Wurz, chairman of the Grand Prix Drivers’ Association, tweeted his outrage at the incident which could have had fatal consequences. He said: “I think we need to discuss a tractor on track….. we can keep it short: this must NOT happen guys.”
Eight years ago F1 star Jules Bianchi died after crashing into the back of the recovery tractor in Suzuka, which was tending to Adrian Sutil’s Sauber. Big questions will need to be answered over why such an incident was permitted to almost happen again.
Sky Sports reporter Ted Kravitz said: “Shades of that fateful race in 2014 with Jules Bianchi.
“If this does anything I guess it will give the drivers an opportunity to get out of their cars and talk about the incident Pierre Gasly had on his way back to the pits on his full wet tyres after his pitstop when he encountered that recovery vehicle on track.

“No doubt all the drivers are going to want some serious discussions to be going on, given of course what happened to Jules Bianchi here, as to how that was allowed to happen.”
Carlos Sainz, who crashed out on the opening lap, said: “Even behind a Safety Car we are going at 100 or 150kph and still at those speeds we don’t see nothing.
“If one driver decides to get a bit out of the racing line or has a small aquaplaning or has to change a switch on the steering wheel and gets a bit out of line and hits a tractor, it’s over.
“I still don’t know why we keep risking, in these conditions, having a tractor on track. You were going to red flag it anyway, so why risk it?”

Posted on September 15, 2022
Formula One CEO Stefano Domenicali said the sport has no plans to hold future races in Russia.The Russian Grand Prix was scheduled to be...
Read More

Verstappen warns against F1 having too many street races – Motorsport.com

Posted on August 9, 2022
The Belgian Grand Prix at Spa is facing the axe from the F1 calendar and is one of a number of traditional events under...
Read More