Photo: Formula Motorsport Limited
Expectations were high this year for FIA Formula 3 runner-up Jack Doohan as he moved into Formula 2, especially as he impressed on his series debut with MP Motorsport at the end of 2021. Not translating speed into results has affected the overview of Doohan’s current campaign with Virtuosi Racing. After 10 out of 14 rounds, the Alpine junior sits ninth in the standings with two sprint race wins, two poles and two further podiums to his name. Despite being ninth, he is only 12 points from fourth.
The upcoming back-to-back-to-back rounds at Spa-Francorchamps, Zandvoort and Monza undoubtedly provide drivers an opportunity to go on a heavy points-scoring run before a big racing gap.
“You could say those three rounds are a crucial part of the championship as following those three rounds [there] is a 10-week break before Abu Dhabi, which is a huge period.” Doohan also remarks that “the new format in the sprint race with the point allocations, maximum points are a lot lower on a weekend now, so having the chance of three weekends in a row is tripled that amount of points, and it gives you a good time to rebound from losses or issues that you’ve had before, which has been the most of my season”.
The Australian started his season with pole at Bahrain, and fought for feature race victory until his compulsory pitstop. After exiting the pits, he touched the rear of Theo Pourchaire’s car and his front wing came loose, which forced him to pit for a second time before eventually taking the chequered flag in 10th. The Paul Ricard feature race was another ‘what could have been’ episode for Doohan as he spun in the chicane of the Mistral straight when he attempted to overtake Pourchaire for second place. Although he could continue, he finished fifth after struggling for pace in the following laps.
Apart from those two actions which meant a clear points loss, the Virtuosi driver points out other misfortunes that might have gone under the radar. 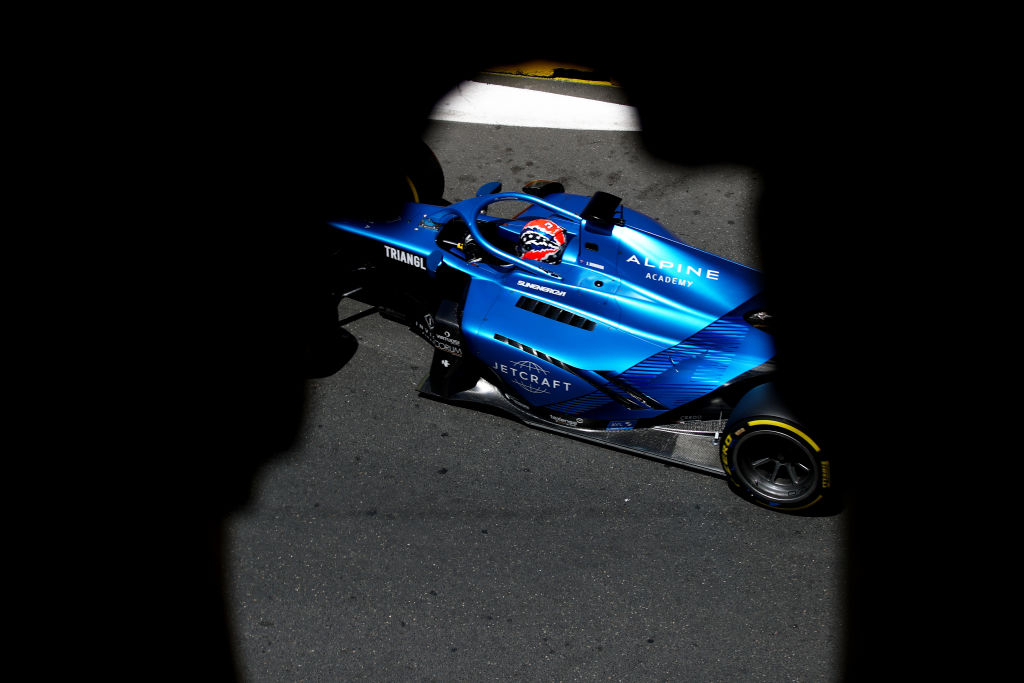 “I’d say I have to put my hand up on occasions like Bahrain feature race, where I made a silly mistake coming out of the pits and in Baku I lost my front wing on the first lap in the sprint race trying to recover from a bad qualifying. I’ve made two clear mistakes that I’d say that were on me, and that I had to learn from.
“But going forward from that, it’s been difficult. I’d say three mechanical failures, not just in the races, but also in qualifying, like in Paul Ricard. And Red Bull Ring with the wrong tyre choice was the inconsistency of our weather forecast, which was a strange call when we went on wets. And then I got ran into the back of by Felipe Drugovich into turn three and lost my rear diffuser and then finished with no points.
In the most recent round Doohan “had really good pace in the race and I think we could have been on at least for top five, if not a podium” in the feature race after winning the sprint, but things didn’t quite go to plan.
“To see how things could have gone at the Hungaroring, I think I needed to only finish seventh to be P4 in the championship, but we had to retire from a gearbox failure and then that drops me from fifth to ninth. Then you go into the summer break and it’s like ‘oh, you’re ninth in the standings’, but without that gearbox failure, would be sitting fourth, which is completely different. So it’s a little bit annoying, especially with everything that’s going on at the moment.”
Doohan wouldn’t comment on the possibility of stepping up to Formula 1 in 2023 should a seat at Alpine become available if Oscar Piastri orchestrates his way out of the team. However, he did hint that his current situation in F2 is not helping him to earn himself that opportunity. Earlier in the season, Doohan stated that he aimed to do only one season of F2. Now, he recognises that returning to the category in 2023 is his most likely option.
“Depending on what happens in the remaining [rounds], at the moment I’d be looking for another season in F2, and luckily I would get that opportunity, which I’m thankful for. But we need to see and wait to see how things came out and to see really what happens, but most probably I’ll be doing a second year of F2. 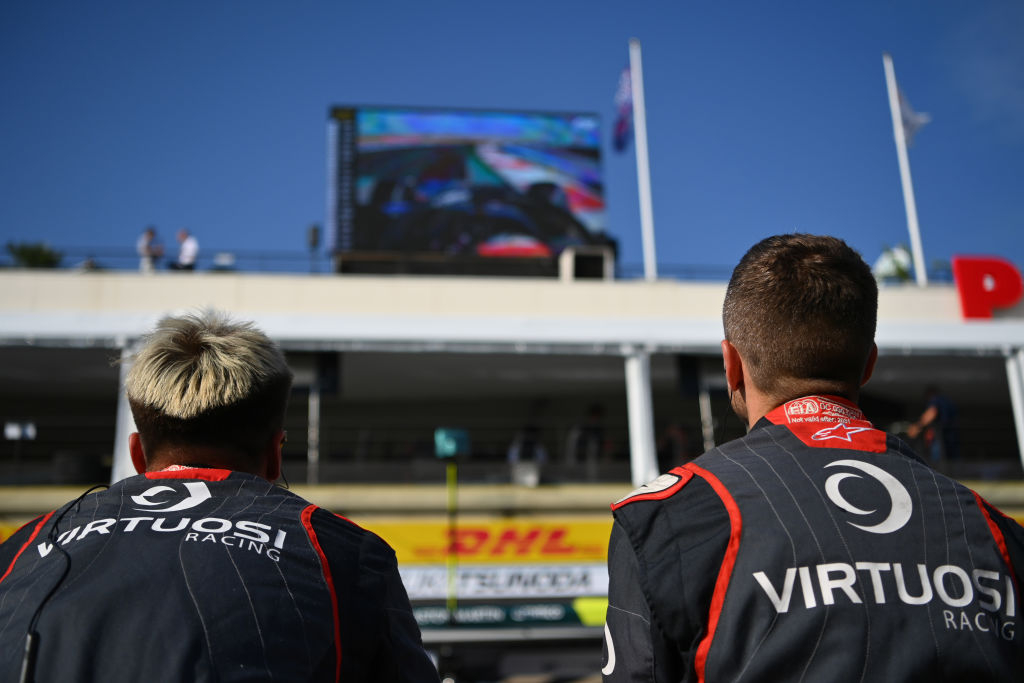 “I’d say I’m quite confident with where I’m at, and think I would benefit from staying where I am, going forward with Virtuosi with what we’ve built, because we’ve worked hard at it. It would be a waste to go anywhere else. I don’t think I need to,” the Australian said about the possibility of switching teams for a sophomore F2 campaign.
“We know the areas we need to work on, reliability we can’t change, but there’s factors that I’ve made mistakes, they’ve made mistakes, and we’ve learned. I know I can come back with them and hopefully we can both get what we want and what we deserve.”
Previously a full-on Red Bull junior and then demoted to being a Red Bull Junior Team-supported driver in 2021, Doohan joined the Alpine Academy for 2022 as it offered the Australian better possibilities for his development. Testing an old-spec F1 car was among those opportunities the French brand provided.
“It’s awesome for Alpine to give me the opportunity to drive the [2021] A521 car,” which he has done twice at Losail and Monza. “These things obviously don’t come about often, and if not, it’s definitely a huge and hefty budget to have to find. So I was very grateful for the opportunity and for the mileage in the car as it’s something that young drivers going into F1, it’s what we need. It’s hard hopping into anything with no experience, and it obviously looks better on your pedigree when a young driver is in the stage of being promoted and has that experience that is much needed.”
Moreover, he is involved within the F1 team performing simulator work, which has helped him to become familiar with how things are done in the pinnacle of motorsport.
“I think it’s more about the understanding of a F1 car, and how the engineering of a F1 car takes place,” he explains.
“Each team works differently, individually, but the same processes apply and the same structure in order that really goes into it is as much of the same. So being able to witness that and also be part of it is an awesome opportunity that I’ve been given. And, yeah, I really enjoy that work.” 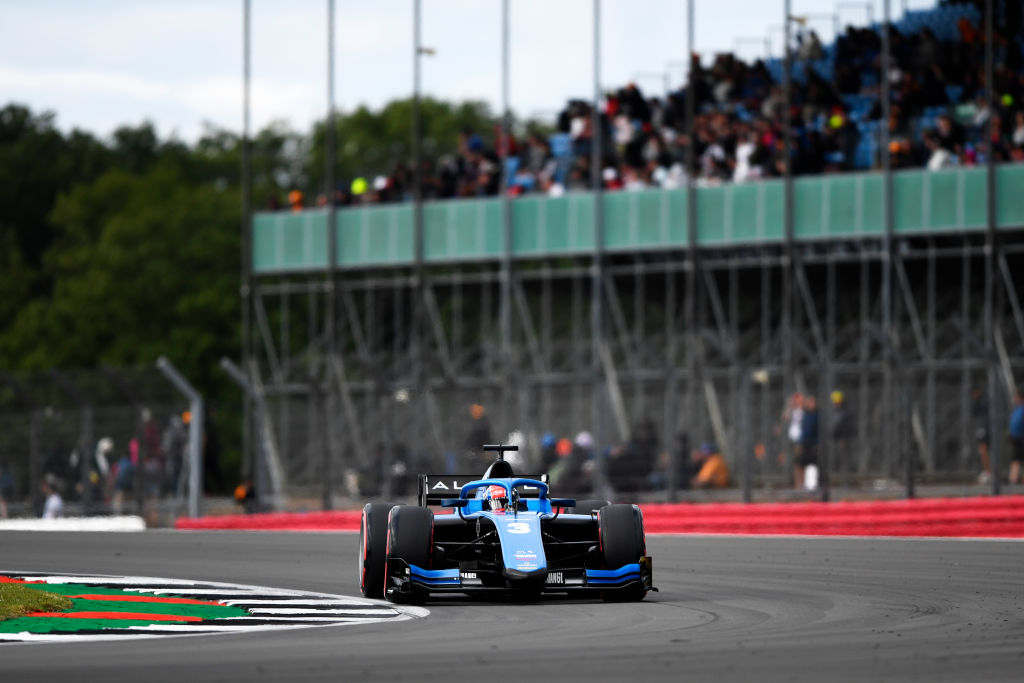 The sporting regulations for the 2022 F1 season rule that teams must field a driver with less than two F1 starts to their name in each car in at least one free practice session during the year. Such modification of the rulebook was made in an attempt to create more opportunities for young drivers to gain F1 experience as well as to bring them closer to the audience. In spite of that, Juri Vips is the only one in F2’s 22-strong grid to have taken part in an FP1 past the season’s midway point.
“Because of the new regulations, track time is so crucial for the F1 teams,” Doohan reckons. “They’re still constantly trying, developing, testing new parts coming in weekends and also slight new regulation changes throughout the year with the raise of the ride height. It’s crucial time for them as well, especially now that their FP’s have been limited to one hour instead of the previous one-and-a-half.
“So, I guess they’re finding a difficult time to take that time, and Juri’s work in Barcelona, he wasn’t even able to go full throttle or full speed, he was lapping around four or five seconds off the pace and just doing testing, and I guess aero testing, for them. It’ll be interesting to see how Liam Lawson’s goes [at Spa]. Maybe with AlphaTauri it will be a bit more of a test for him and for them to see. I’m hoping that some drivers get a chance to be in that machinery and in the end show the teams what they’re capable of,” Doohan says, acknowledging that drivers not being able to showcase their talent wasn’t probably what the F1 board had in mind when the rule was designed.
“They [F1] wanted it probably as a chance for young drivers to gain experience in the car, and by that you need to be going at speeds where you can feel the car and really understand things. At the moment, there’s no regulation on how the teams have to structure those sessions, so, until that, they’re probably going to use them how they want to.”
If that changes though, “simulating a proper and actual F1 free practice session, I think it’s the best experience that you can get” and “if they [F1 teams make sure to] do it right, I think it can be a very perfect tool.”
Although it is yet to be confirmed, Doohan is believed to be the driver selected for Alpine’s two mandatory FP1 handovers with Piastri almost ruled out of making his own F1 weekend debut amid his contractual dispute with the team over his 2023 seat. 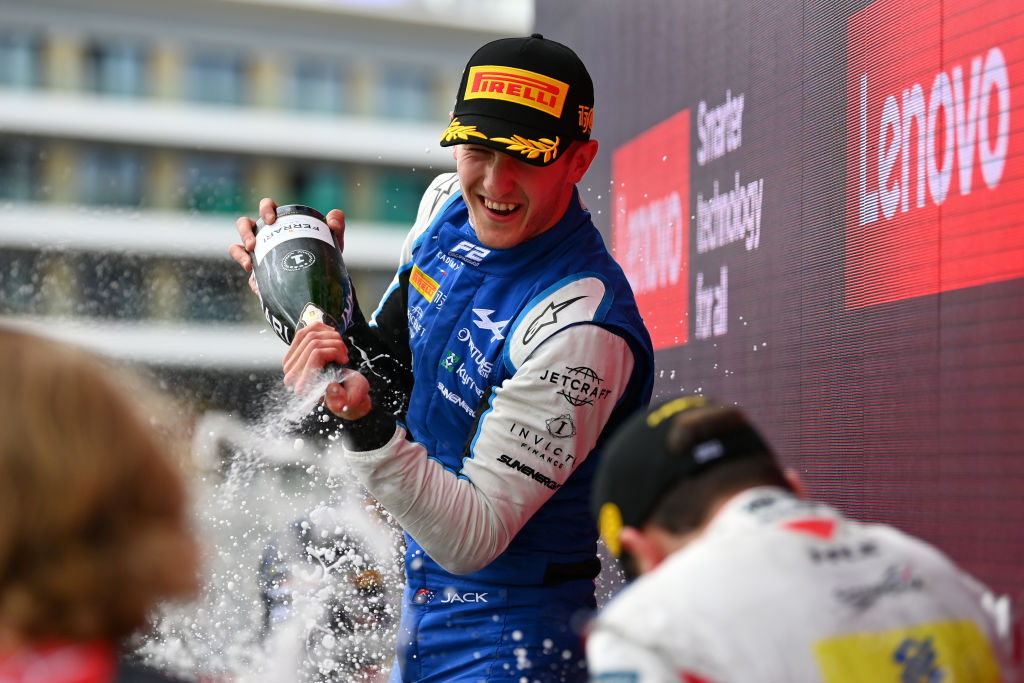 Regarding the remaining rounds of the F2 season, “third is possible” says Doohan. Carlin’s Logan Sargeant currently holds that position and is the top rookie in the standings, 31 points ahead of Doohan.
“Things are going to have to go my way in order of reliability, and hopefully we just have a little bit of luck. I don’t really want to say that, but I’ve been saying that for a while, so I want to try and cancel that out and just try and focus on myself and what’s in our control. But I can have a good race and I can be back in fourth in the championship, but it really depends on everyone else.”
“I’m hoping to have a solid three rounds, which I know I can do, and going into Abu Dhabi in a good window to hopefully end the year as the best rookie would be good, but in the end just being able to show what I’m capable of, which I think I’ve done. Continuing to do that, and ending the season in a solid standard.”
Listen to our full chat with Jack on this week’s podcast, which you can listen to below or on Breaker, Google Podcasts, Overcast, Pocket Casts, RadioPublic, Castbox, Apple Podcasts and Spotify.
?
Established in 2011 and previously found at PaddockScout.com, Formula Scout is home to regular news and features from the world of junior single-seater racing, tracking the progress of future grand prix stars.
© 2022 Formula Scout. All rights reserved.

Daniel Ricciardo or Oscar Piastri at McLaren or Alpine? Predicting the 2023 F1 grid - The Independent

'F1 reality with a bit of Hollywood': Ricciardo on his TV show · RaceFans - RaceFans

Posted on August 12, 2022
Fernando Alonso was the best choice in the F1 driver market for Aston Martin to approach after Sebastian Vettel announced his decision to retire,...
Read More