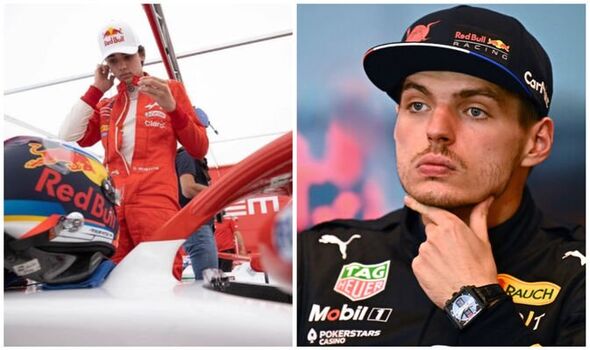 We use your sign-up to provide content in ways you’ve consented to and to improve our understanding of you. This may include adverts from us and 3rd parties based on our understanding. You can unsubscribe at any time. More info
Red Bull have signed up Formula One legend Juan Pablo Montoya’s son in their bid to find their next Max Verstappen, according to reports. Sebastian Montoya has joined the Red Bull Athletes roster as he plots a career in motorsport.
The younger Montoya was previously part of the Ferrari Driver Academy. He received support from Ferrari while he was karting for a year in 2018.
Looking to follow in the footsteps of his father and former Williams and McLaren driver Juan Pablo, the 17-year-old started 2022 in good form. He recorded two wins for Mumbai Falcons in the Winter Championship Formula Regional Asia. Montoya Jnr is 10th in his rookie season in the Formula Regional European Championship, in which he is driving for Prema.
And Red Bull have now snapped up the teenager as they seek to find the gems of the sport’s next generations. His move does not mean he is part of the Red Bull Junior team, but he can receive sponsorship.
JUST IN: Verstappen grid penalty plan hatched by Red Bull in boost for Leclerc 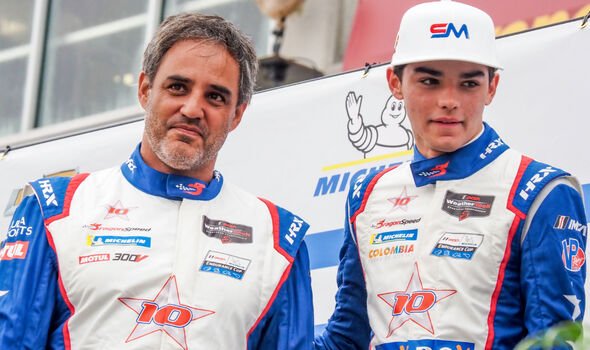 That is according to F1 Feeder Series, who point out that Montoya posted a picture to his Instagram clad in Red Bull gear. His caption read: “Don’t know about you but I love my new helmet. News for today, I am a Red Bull Athlete. Thanks Red Bull for the support!”
Montoya will have hopes of one day lining up alongside Verstappen, who is also the son of a former F1 racer – Jos Verstappen. Red Bull have enjoyed an excellent 2022 season in F1, building on Verstappen’s controversial Drivers’ Championship victory last year. The Dutchman leads the championship by 63 points just beyond the midway point of the campaign.
Verstappen benefited from Charles Leclerc’s crash to win the French Grand Prix last Sunday. It was his seventh race victory of the season and means his rivals have plenty of work to do in their bid to catch the reigning champion in the final 10 races.
DON’T MISS…
Christian Horner shuns Sergio Perez in Verstappen Red Bull confession
Horner refuses to compare Verstappen to anyone in ‘evolving’ claim
Wolff highlights ‘biggest asset’ in chasing Verstappen and Leclerc
A post shared by Sebastian Montoya (@sebasmontoya58) 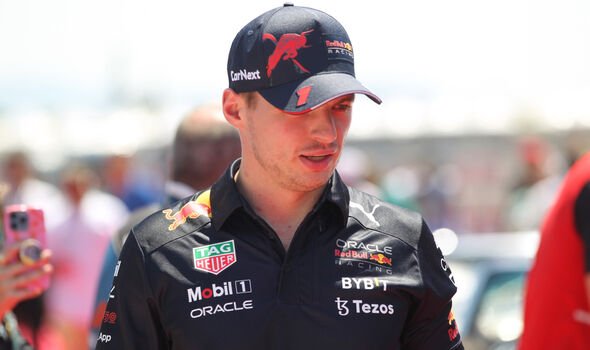 Having also extended their lead in the Constructors’ Championship, Red Bull have had an excellent season. They have overcome the reliability issues Verstappen and team-mate Sergio Perez experienced during the first few races.
Team principal Christian Horner has said that Verstappen’s success so far is beyond his ‘wildest dreams’ especially after the sweeping regulation changes at the start of the season.
Horner said: “If you had told me before Christmas last year that with the biggest rule change in 40 years and with the energy we put into last year’s championship we would now have eight wins, two sprint wins and leads of 63 and 82 points in the championship, it would have exceeded my wildest dreams.”
“It’s really indicative of the determination, dedication and hard work behind the scenes at the factory. We see a very competitive Ferrari this year and we see Mercedes building momentum. But when you consider we were the last team to put the focus entirely on this year, we’ve done a phenomenal job.”
See today’s front and back pages, download the newspaper, order back issues and use the historic Daily Express newspaper archive.

Posted on August 16, 2022
You are logged in. Benefit directly from all the benefits of your account:Become part of the largest racing community in the United Kingdom. Create...
Read More

Posted on August 27, 2022
Singapore Singapore The Formula 1 Grand Prix is set to make a strong comeback and shows that Singapore is ready to host world-class events...
Read More

Posted on September 9, 2022
Dive into every digit of every session with Live Timing Data. Get a bird’s-eye-view of the race with Driver Tracker Map. Know who’s burning...
Read More

Posted on July 9, 2022
After a power unit issue resigned Norris to 14th place in qualifying on Saturday, he dropped back to 18th when McLaren double-stacked its cars...
Read More