We use your sign-up to provide content in ways you’ve consented to and to improve our understanding of you. This may include adverts from us and 3rd parties based on our understanding. You can unsubscribe at any time. More info
Toto Wolff has claimed Fernando Alonso is the only driver on the current F1 grid to not accept porpoising issues are a problem. The Mercedes driver claimed the drivers spoke about the issue over the Azerbaijan Grand Prix weekend in a private meeting.
The meeting found almost every diver on the grid believes porpoising issues are of concern, except for the double world champion. Speaking to Sky Sports Germany, Wolff said: “All drivers got together and agreed that it’s a problem – apart from one: Alonso.”
However, Alonso admitted that bouncing was the worst it had been for 20 years. The Alpine driver even said he wished the changes were made for the “young boys” who have just entered F1.
However, he stressed it would be difficult to get all teams to agree to making changes to their cars. Speaking to The Race, he said: “I think it’s a combination also on this track, it has been very bumpy on the straight also with the old cars, so this year it’s exaggerated.
READ MORE: Lando Norris suggests Mercedes fix to help Hamilton and Russell 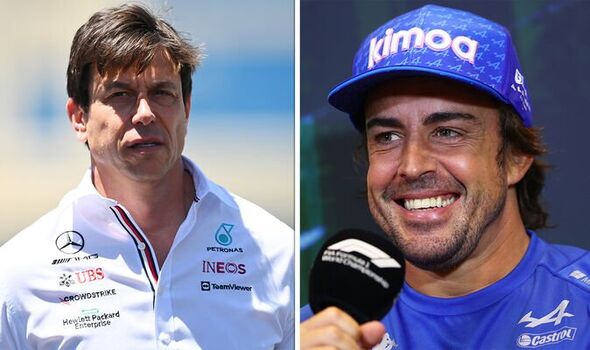 “I think Jeddah, it was very smooth, and Australia, and no one was complaining. It’s going to be very difficult to agree for all the teams [to make changes].
“But yeah, I wish they do something for the young boys. For me, it’s OK for a few more years!” Lewis Hamilton struggled at the Azerbaijan Grand Prix, claiming he was biting down on his teeth in pain and was praying for the race to end.
Mercedes boss Toto Wolff appeared to be pushing for rules changes ahead of yesterday’s race, claiming most of the drivers think the porpoising issues were really bad. He added: “The regulations will follow for many years. It’s the moment now to say that is a real issue and what can we do to lift everybody up.”
DON’T MISS
Horner feels Mercedes told Lewis Hamilton to ‘b****’ about bad back [INSIGHT]
Lewis Hamilton provides worrying update casting doubt on Canada GP [ANALYSIS]
Lewis Hamilton admits he was ‘praying’ for Azerbaijan GP to end  [COMMENT]

But, McLaren’s Lando Norris admitted he was “not complaining” about the porpoising issues and claimed Mercedes could solve their car with a sip fix. He appeared to take a swipe at some of those backing changes, adding it’s an issue people needed to sort out themselves.
Speaking to F1TV, Norris said: “We can quite easily go lower, gain performance but have more porpoising. But we just think where we are at is the correct amount. I’m sure the Mercedes can have a much stiffer floor and raise the ride height and it would be much nicer for them.
“But they obviously just don’t want to lose performance. I don’t think it’s anything to complain about, it’s just people need to find a way of fixing it themselves.”
See today’s front and back pages, download the newspaper, order back issues and use the historic Daily Express newspaper archive.

Posted on September 2, 2022
That will be Meneer Max Verstappen from now on.Just days before the Red Bull driver angles for his fourth straight race victory and his 10th...
Read More

Posted on September 3, 2022
Our car experts choose every product we feature. We may earn money from the links on this page. Lewis Hamilton led each qualifying session...
Read More

Posted on October 7, 2022
An F1 pole position is a unique part of a Grand Prix weekend. While the race is enjoyable, many fans are bigger admirers of...
Read More