We use your sign-up to provide content in ways you’ve consented to and to improve our understanding of you. This may include adverts from us and 3rd parties based on our understanding. You can unsubscribe at any time. More info
F1 returns to Canada this week as Max Verstappen looks to extend his lead at the top of the drivers’ standings. The sport has grown massively in recent years, leading to more and more cities hoping to host grand prix. This season has already seen Miami host its first race, and Las Vegas is also poised to welcome F1 next year. In the UK, Silverstone has been the staple of the F1 calendar for decades, but Britain could get another race if reports from last year are to be believed.
US investment firm 777 Partners were thought to have been in talks to host a race in the capital, London.
According to the Daily Mail, the proposed circuit is thought to be located in east London.
Josh Waters from 777 partners was quoted as saying: “We are hopeful that it is coming. We are hugely excited about it.
“There will be an electric atmosphere as the greatest athletes in the world, along with an international fanbase and the world’s largest companies as sponsors, descend on the Docks for race weekend.
“More importantly, we will build a world-class sports and entertainment complex that can serve the community year-round and revitalise the surrounding areas. 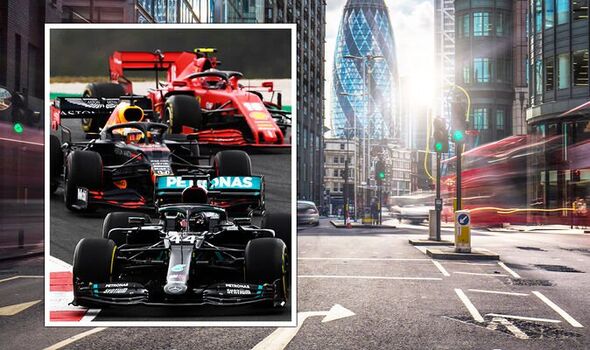 “It is the type of thing you really can’t quantify until it actually happens, but the impact is dramatic.”
London Mayor Sadiq Khan appeared to back the idea, saying in a statement at the time: “London is always open to hosting the world’s biggest and best sport events – from the final of UEFA Euro 2020 to the NFL, and the Cricket World Cup to Major League Baseball.
“The Mayor believes that it should be possible to organise a race in London in the future and has asked his team to explore options with F1.”
Toto Wolff and Christian Horner also added their public support to a potential London Grand Prix.
Wolff said last year: “I would like that we have a grand prix in Silverstone as this is what the fans love and Silverstone is part of the traditional circuit of races in Formula 1.
“But racing in London would top everything and I hope that the Mayor of London and [the Prime Minister] Mr Johnson read this and we get that going.”
READ MORE: Ferrari blasted for ‘screwing things up’ as Sainz sent Leclerc warning

Horner added: “It would be fantastic to do a London Grand Prix.
“We saw from the event in Trafalgar Square a few years ago the appetite for F1 and it showed it is possible to close central London down to hold an event.
“It would be a fantastic advert for London and great to see and hear GP cars around the streets. As with all these things it’s never straightforward.
“The most important thing is the desire for it.
“If the Mayor wants it to happen, if the Government wants it to happen and Formula One wants it to happen, hopefully there’s enough intent that it’s not unfeasible.”
F1 legend Ross Brawn had previously told Standard Sport: “We would like to see London complement Silverstone, not replace it.”
DON’T MISS
Red Bull boss Horner frustrated by Ferrari heading into Canadian GP [INSIGHT]
F1 news: Toto Wolff has Mercedes promise, Russell’s new target, [ANALYSIS]
Ferrari blasted for ‘screwing things up’ as Sainz sent Leclerc warning [INSIGHT]

The plan hit a barrier, however, as F1 CEO Stefan Domenicali poured cold water on the plan last December.
He said: “In life, I always say never say never but we are not here to sell something that is not realistic,” he told Standard Sport.
“I would say that we already have Silverstone with British support and a unique place.
“Coming to a city like London would be quite invasive and difficult for the community to manage.”
See today’s front and back pages, download the newspaper, order back issues and use the historic Daily Express newspaper archive.

Posted on October 21, 2022
As far back as late spring, when the first rumblings of Alpine’s plan to place Oscar Piastri at Williams for next year were starting...
Read More

Posted on August 17, 2022
We use your sign-up to provide content in ways you’ve consented to and to improve our understanding of you. This may include adverts from...
Read More

How a cost cap breach could decide the F1 world championship – Motorsport.com

Posted on June 8, 2022
According to the FIA financial regulations, that is a potential outcome should a team breach the cost cap limit, as several expect to.However, no...
Read More